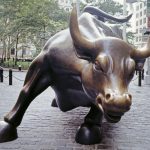 While a downward “correction” in stock prices doesn’t necessarily mean a broad recession is imminent (because, after all, the stock market isn’t the economy), Wall Street does play an outsized role in the economy and government finances of New York.

Albany’s dependence on personal income tax (PIT) has reached an all-time high of 65 percent of total state tax receipts—and roughly 40 percent of the PIT originates with the highest-earning 1 percent of New Yorkers, whose incomes start at roughly $1 million. These taxpayers, in turn, relied on capital gains from the sale of corporate stocks and other assets, both real and financial, for an average 28 percent of their income. They reported nearly 80 percent of the total net capital gains pocketed by all New York residents in 2016, according to federal tax data.

As shown below, net capital gains in New York’s PIT base have been on a roller-coaster ride for the past 20 years. In some years, dips in capital gains reflected the extent to which high-income earners delayed or accelerated asset sales in anticipation of future federal tax cuts.  In most years, the gains trend is at least roughly correlated with Wall Street trends—but on bit of a lag basis, since big decreases in stock prices generate losses that offset or even wipe out net gains for years afterwards (and vice versa). 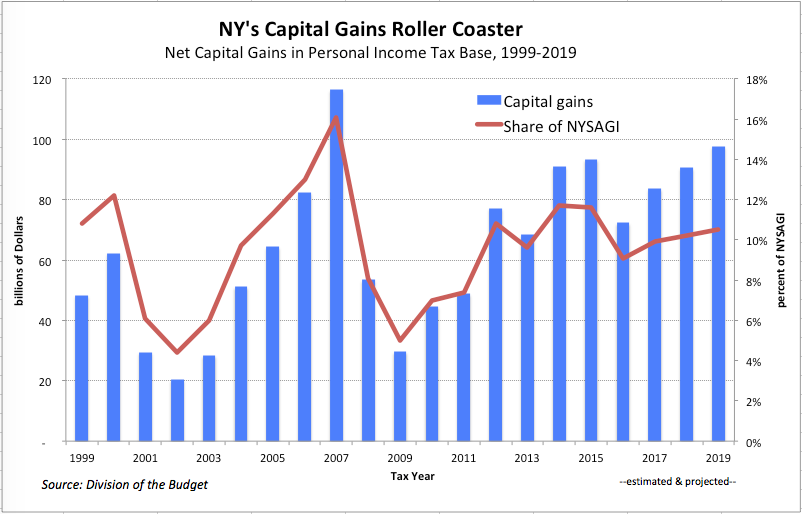 As of the market’s close on Thursday (Dec. 6), the Dow Jones Industrial Average and the S&P 500 index were both up less than 1 percent on the year, having fallen nearly 10 percent below their early October highs. Both continued to decline through early Friday afternoon.

(UPDATE from Friday’s Wall Street Journal: “Investors’ retreat from U.S. stocks turned into another rout Friday, leaving major indexes down more than 4% for the week as the November jobs report failed to offset persistent anxiety over the U.S.-China trade dispute and the global economic outlook.”)

If stock prices don’t rebound strongly before the end of the year, the state government’s PIT receipts from capital gains income in state FY 2019 (which ends next March 31) are likely to fall well below the 8.2 percent growth estimate originally presented in the FY 2019 Executive Budget. On the current tax base, every percentage point in net capital gains realizations translates into roughly $80 million in state revenues.

As of Oct. 31, Governor Cuomo’s Division of the Budget (DOB) was forecasting a slightly improved budget outlook, featuring smaller budget gaps that will be easily manageable if the governor continues holding state operating funds spending growth to 2 percent.

However, the risks associated with the stock market’s performance were also highlighted in DOB’s recent Mid-Year Financial Plan Update (p. 75):

… The uncertainty surrounding the macroeconomic outlook for the national and global economies is amplified in the financial markets, as demonstrated by the recent 9.3 percent decline in equity prices as represented by the S&P 500. Risks related to the impact of tariffs, the strong dollar, and weakening global growth are likely to continue to create volatility and restrain equity market growth over the near-term. Due to the disproportionate global tilt of financial markets, the State’s finance sector is particularly vulnerable to these risks. Financial markets also tend to amplify the perturbations associated with shifting monetary policy, as businesses and investors adjust to interest rates that are approaching their highest levels in ten years. Weaker and/or more volatile markets than anticipated could result in weaker bonus and wage growth, as well as lower realizations of taxable capital gains than reflected in this forecast. In contrast, stronger equity markets, along with stronger national and global growth, could result in stronger employment and wage growth than is reflected in this forecast.

In 2017, the securities industry accounted for 7.7 percent of total personal income in New York, nearly five times the sector’s average share of personal income in all states. Securities firms paid an average salary of $422,000, the highest of any major industry, accounting for one-fifth of all salaries paid in New York City but only 5 percent of total private employment, according to state Comptroller Thomas DiNapoli’s office.

Securities industry bonuses are a closely watched element of the PIT base. In its latest annual report on the industry condition in New York City, the state comptroller’s office observed:

The securities industry has been profitable every year since the recession ended in 2009, and salaries are higher than at any time since the financial crisis. The industry is on track for another good year in 2018, barring unforeseen developments later in the year.

That benign prediction dates back to September—just before the markets tumbled.

The major public pension systems of New York State and New York City invest more than 60 percent of their assets in domestic and global stocks and in other higher-risk financial categories, including private equity and hedge funds. There’s a strong correlation between movement in stock prices and the pension fund investment returns—as illustrated by the following chart comparing annual movement in the S&P 500 with investment returns of the New York State and Local Retirement System (NYSLRS), the state’s largest public fund, which covers all employees other than teachers outside New York City. 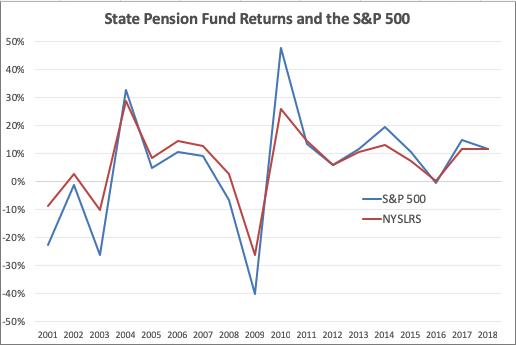 The “actuarial” value of pension fund investments ultimately affects the taxpayer-funded pension contributions of the state and its local governments. NYSLRS and the five New York City pension funds calibrate their required contribution rates based on the assumption that their investments will earn 7 percent a year, while NYSTRS assumes a 7.25 percent rate of return. However, contribution rates do not immediately rise when investment returns in a given year fall below those levels. Instead, as part of the calculation, the necessary contributions are “smoothed” on the basis of investment returns over five previous years—which, in the case of all the New York funds, have included some years when returns were in low double-digits.

Tax-supported contribution rates charged by New York’s public pension systems peaked between 2011 and 2014 and have been falling since. However, if current Wall Street trends lead to bigger losses and a full-blown bear market, characterized by a further drop of 10 percent in stock prices and failure by the pension funds to meet their ambitious return targets for two or more years in a row, pension contribution rates are likely to start rising again within the next few years.

Just a month ago, DiNapoli cited a “surging stock market” as the main factor behind a “strong” first half, during which the fund reported a compound return of 5 percent. But measured from the start of the NYSLRS fiscal year April 1, the S&P 500 has plunged by nearly 10 percent, probably wiping out NYSLRS’ modest gain in the first two quarters. Stock prices will have to rebound strongly for the pension fund to make anything close to its 7 percent target for the fiscal year.

Meanwhile, city Comptroller Scott Stronger reported that the city’s five pension funds had earned between 2.72 percent and 3 percent since July 1. Given their asset allocations, all five city funds have almost certainly sunk into negative territory since the summer. The same is probably true of NYSTRS, whose investment performance roughly tracks those of the city plans.

Eight years into what now ranks as the second-longest economic expansion in modern American history, the financial markets are signaling a need for greater budgetary restraint in Albany. Governor Cuomo, who has repeatedly said he’ll adhere to a self-imposed 2 percent limit on state operating funds spending growth, will need to resist pressure for higher spending from a new Democratic Senate majority with more expansive budgetary preferences.