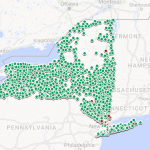 Each dot on the map represents a different postal ZIP code, color-coded to indicate whether previously itemizing taxpayers in these brackets are likely to see their taxes reduced (green) or increased (red), based on estimates derived from the Tax Foundation’s 2018 Tax Reform Calculator. The proliferation of green dots, especially upstate, shows most middle-class New Yorkers will not see their taxes rise, despite the TCJA’s $10,000 cap on state and local tax (SALT) deductions.

Important additional explanatory information can be found below the map.

(Allow time for map to load.)

For the sake of illustration, the estimates presented here assume that the filers or joint filers shown will have 2018 adjusted gross income (AGI) and deductions identical to the averages reported for all filers in their AGI bracket in each ZIP code as of 2015, the latest year for which zip code-level data are available from the Internal Revenue Service (IRS).

NOTE: The framed map above defaults to showing results for married couples with two children under the age of 17 in the $100,000 to $200,000 AGI bracket. Click on any dot to see the results for a particular ZIP code.

To examine results for other taxpayer types, click here to open the full-screen, full-feature map (allowing extra time, again for the map to load).  The left side of the screen will list eight taxpayer types by filing status and AGI range, all marked with a checkbox. To explore results for different taxpayer types and income ranges, (1) uncheck all the boxes and then (2) check the box corresponding to the income range and taxpayer types to see the estimated impact for that group. Repeat the process for each additional group to see their results.

It is important to note, again, that these estimates are strictly illustrative and do not imply a general result for all filers in these income brackets in each ZIP code.  (The IRS does not publish a full statistically valid sample of taxpayers at the state or local level, and the published ZIP-level data do not break down income and deduction information by taxpayer type.)

The TCJA is expected to result in lower federal taxes for nearly all households that already claimed the standard deduction, which has been nearly doubled under the new law. The mapped estimates here thus concentrate on impacts among the 35 percent of New Yorkers who itemized as of 2015— including a majority of those in the income ranges covered here, which encompass a broad enough definition of middle class to cover upstate and downstate New York.

In the available IRS data, higher-earning taxpayers are grouped in a single, open-ended category of $200,000 and above, which is not useful for comparison purposes. As shown by the tables on page 5 of our updated Research & Data paper, “Exploring New York’s Top-Heavy Tax Base” the SALT cap will result in a higher net tax rate for income millionaires in New York City.

At income levels below $75,000, the overwhelming majority of New York taxpayers of all types will see significant tax decreases. Above $200,000, but below the income millionaire level, the effect will be more mixed. Most filers in higher six-figure categories were already hit by alternative minimum tax (AMT), which allows no SALT deduction. Many of these households, in turn, are likely to experience no significant change in federal taxes—or a decrease, if they own or are a partner in a business eligible for the larger federal tax cut for pas-through entities.

To estimate how the new federal tax law might affect your family’s federal income tax bill for 2018, use the Tax Foundation’s calculator, below.