As the Cuomo administration takes heat for withholding data on coronavirus in nursing homes, it’s worth noting that the federal government’s reporting is also flawed and incomplete.

Since mid-May, the Centers for Disease Control and Prevention (CDC) has required homes to submit detailed weekly reports on coronavirus, including counts of infection deaths among both residents and staff, as well as information on testing and access to masks and other infection-control equipment.

However, the CDC made it optional for homes to retrospectively report what happened in March, April and early May – which is when New York’s pandemic was at its worst.

Most facilities appear to have chosen against providing the retrospective data, with the result that CDC’s total count of deaths in New York as of Aug. 23 was just 4,610, about 2,000 less than the state Health Department’s flawed official tally.

Worse, the CDC does not clearly identify which homes did the optional reporting, making valid comparisons among facilities, regions and states difficult if not impossible.

The state’s count has been deservedly faulted for leaving out thousands of nursing home residents who died after being transferred to hospitals, something done by few if any other states. This significantly understates the impact on nursing home residents and their loved ones, and skews New York’s statistics in relation to the rest of the country.

The CDC more logically counts the coronavirus-related deaths of all residents, regardless of where they were in their final hours. The CDC also presents the data in spreadsheet form, dated by week, whereas the state posts an undated PDF file that’s awkward to work with.

The advantages of the CDC’s methodology are largely negated by its incomplete and inconsistent reporting from March to early May, which was the critical period of the pandemic in New York and other Northeast states.

In spite of those flaws, the CDC data set does raise questions about the accuracy of New York’s reporting.

For the weeks after May 24 – when the CDC mandated reporting for all homes – the agency recorded 956 coronavirus deaths as of Aug. 23, the most recent date available. That number is almost 50 percent higher than the state Health Department’s total for the same period, which was 646. That implies that roughly one out of three residents were transferred to hospitals before dying, and therefore not reflected in DOH’s count.

Assuming that ratio applies to the nursing home fatalities throughout the pandemic, the state’s full toll would be approximately 9,600, or 3,100 higher than the official count.

For certain homes, the CDC data show higher death tolls than the state – suggesting that these facilities opted for retrospective reporting back to the beginning of the pandemic, and not just since mid-May.

The widest disparity is seen at the Upper East Side Nursing and Rehabilitation Center in Manhattan, where the state count through Aug. 12 was 14 deaths but the federal count through July 26 was 95 (see table). Of the 25 highest tolls in the CDC data, nine were more than double the number reported by the state.

If the CDC were to mandate full reporting from all homes, it seems likely that more such discrepancies would emerge.

The Health Department has been requiring homes to report the coronavirus deaths of all residents, both within and outside their facilities, through its Health Emergency Response Data System, or HERDS. To date, however, the agency has held back the count of hospital deaths, omitting it even from its own report on the pandemic in nursing homes.

At legislative hearings last month, Commissioner Howard Zucker told lawmakers who pressed him on the issue that he wanted to verify the accuracy of the numbers before releasing them.

The department has also postponed the Empire Center’s request for the data through the Freedom of Information Law, questionably claiming that it needed more time to conduct a “diligent search” for the information.

The result is that a major public health disaster affecting New York’s nursing home residents is not being accurately documented by either of the agencies responsible for protecting them – because state officials are refusing to share the true numbers, and federal officials haven’t yet asked for them. 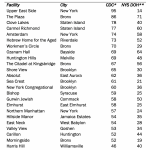