(Update: A few hours after this post was published, the state added limited data about nursing homes to its vaccine tracker website, including a tally of 206,831 doses administered so far. No new information was provided about nursing home deaths.)

The Cuomo administration’s resistance to sharing pandemic data from nursing homes has broadened to withholding vaccination numbers as well as full death counts.

Although the state’s vaccine progress reports have become more detailed and frequent—appearing daily since Jan. 15—they notably leave out any information about nursing homes residents or staff, who were made a top priority for immunization because of residents’ high infection and mortality rates from COVID-19.

A chart released on Jan. 18 gave considerable detail on the situation in nursing homes, including the fact that 57,601 or 67 percent of residents and 48,758 or 37 percent of staff members had received at least one shot (see below).

Since then, officials have occasionally released partial information, such as the fact that 44 percent of nursing homes staff have been vaccinated. Most numbers in the Jan. 18 chart have not been updated since.

The statistics on the state’s vaccine tracker—which showed that a total of 1.4 million doses had been administered as of Jan. 26—do not reflect doses going to nursing home residents or staff. Few if any other states are reporting in this way.

The governor’s aides have indicated that they intend to add long-term care numbers to their reporting, but have not given a timeline.

The omission adds to the confusion surrounding the vaccine rollout in New York and raises new questions about the quality of care being provided in nursing homes.

The situation mirrors the state’s incomplete reporting on nursing homes deaths throughout most of the pandemic. In a practice used by no other state, the Health Department’s official nursing home toll counts only deaths that occurred physically within the facilities, leaving out thousands more that happened after sick residents were transferred to hospitals.

In September, the Empire Center sued to force release of the full death toll under the Freedom of Information Law.

The Cuomo administration’s vaccine reporting—both in and out of long-term care facilities—got off to a slow and skimpy start, with officials providing only seven official updates over the first 30 days.

Reporting gradually became more thorough and regular in the middle of this month, and for several days the governor’s Twitter account posted updates that included a subtotal for long-term care. That practice ended on Jan. 13.

The state’s recently launched vaccine tracker gives running totals of first and second doses administered in each of 10 regions of the state. But it specifies that those numbers do not include immunizations in long-term care facilities, which are being delivered by a federal collaboration with CVS and Walgreens pharmacies.

As the tracker also acknowledges, all vaccinations that happen in New York must be reported to the Health Department, regardless of the venue or provider.

During his televised briefings, the governor frequently specifies what share of health-care workers have been vaccinated at individual hospitals across the state—but he has given no comparable numbers for nursing homes.

The state also discloses how many doses of vaccine have been delivered to the state in each week. These numbers, too, leave out long-term care.

The state’s vaccine reporting is incomplete in other ways, too.

The vaccine tracker declares, for example, that the state has used 93 percent of the first doses delivered by the federal government so far. However, that ratio leaves out doses that were delivered for and administered to long-term care facilities. A nationwide tracker maintained by Bloomberg showed that New York had used 66 percent of its total doses as of 12:45 a.m. on Jan. 27.

Many states are also giving a demographic breakdown of vaccinations by age, gender and racial group. New York is not.

The impact of the pandemic on nursing home residents has been a sore spot for the Cuomo administration since March 25, when the Health Department directed the facilities that they should not turn away COVID-positive transfers from hospitals. The policy was widely criticized for putting vulnerable residents at risk, and the state overturned it in early May.

In July, the Health Department issued a report declaring that the policy had not significantly contributed to the high death rate in nursing homes. But experts dismissed the report as flawed, in part because it relied on state’s incomplete mortality data.

Since then, the governor and his state health commissioner, Dr. Howard Zucker, have refused to provide the full nursing home toll—despite bipartisan inquiries from the Legislature and multiple requests under the Freedom of Information Law, including one filed by the Empire Center on Aug. 3.

The Health Department has repeatedly postponed answering the Empire Center’s request, most recently to March 22. The center sued the department to force release of the data, and the case has been awaiting a judge’s ruling since Oct. 30.

This week, state Sen. James Skoufis, D-Queens, threatened to subpoena the missing nursing home death records from the Health Department unless Commissioner Howard Zucker agreed to provide them at an upcoming legislative hearing on the budget. Shortly after that statement, the Legislature rescheduled the hearing from Feb. 3 to Feb. 25. 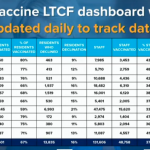 A prototype of a vaccine dashboard for nursing homes that was released on Jan. 18 but has not be updated since.