The push in Albany to boost wages for home health aides is seemingly disconnected from the larger realities of the state’s long-term care system.

As they lobby for a big increase in Medicaid funding, officials in the home care industry are warning that the state faces an “extreme shortage” of in-home caregivers due to low pay.

What they don’t mention is that New York’s home care workforce is extraordinarily large and well-funded by national standards – and growing at an explosive rate.

Any labor shortages that still exist are a sign of deeper problems in the state’s home-care program that a wage hike alone could not fix.

At issue is the Fair Pay for Home Care Act (S. 5374 (May)/A. 6329 (Gottfried), , which would require that home health aides be paid at least 50 percent more than the minimum wage, plus an allotment for benefits.

The additional cost to the state’s Medicaid program, which finances most home care, has been estimated at $4 billion a year. That’s enough to cover a year’s tuition and living expenses for 154,000 SUNY students, buy health insurance for 488,000 individuals or pay the salaries of 50,000 schoolteachers.

The bill is a top priority of the health-care workers union 1199 SEIU, which is one of Albany’s most influential interest groups, and has broad, bipartisan support in both houses of the Legislature.

Before moving forward, lawmakers should consider the following context from the Bureau of Labor Statistics: 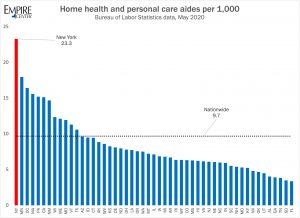 New York’s spending on home care is also skyrocketing. Over the past decade, Medicaid expenditures on the services known as personal assistance, which are the bulk of home care, quadrupled from $3.2 billion to $12.8 billion. As of 2019, the last year for which national data are available, New York’s per capita spending on personal care was almost eight times higher than the national average and almost three times higher than any other state.

The growth rates of spending and employment far exceed the increase in the state’s over-65 population, which rose 30 percent from 2010 to 2020. 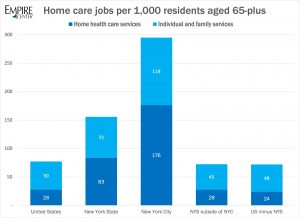 Industry officials report that the minimum wage hike enacted in 2016 has made it harder for them to compete for workers with fast-food chains and retail stores. According to labor data, however, home care employment has continued growing at a robust pace since 2016, even as the number of fast-food and retail jobs has declined (see chart). 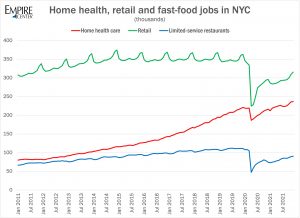 These trends suggest that any shortage of labor in the home care industry is driven not by low wages, but by a level of demand that is unusually high by national standards – especially in New York City – and continues to rise to unprecedented heights.

Rather than simply pouring more money into an extraordinarily expensive program, lawmakers should focus on what appears to be excessive utilization of home care services – by tightening eligibility rules and screening procedures, allocating resources more even-handedly around the state, and improving enforcement against abuse and fraud.