The U.S. Justice Department’s newly announced inquiry into coronavirus in New York’s nursing homes comes with a crucial caveat: it will look only at government-operated facilities, which represent a small fraction of the state’s nursing-home industry.

Given this puzzlingly narrow focus, the probe will effectively disregard the vast majority of people who got sick and died – and thus appears unlikely to provide satisfying answers for surviving loved ones, or useful guidance for future policymaking.

On Wednesday, the department announced that it was requesting data from four states – New York, New Jersey, Pennsylvania and Michigan – each of which had issued orders compelling nursing homes to accept coronavirus-positive patients. The department’s release said those orders “may have resulted in the deaths of thousands of elderly nursing home residents,” and that it was considering a full investigation under the Civil Rights for Institutionalized Persons Act, or CRIPA.

Governor Cuomo, in a joint statement with Michigan Gov. Gretchen Whitmer, called the probe “a transparent politicization of the Justice Department.” They charged that the department had singled out four Democrat-led states while bypassing Republican-led states with similar policies.

The announcement was welcomed by critics of the Cuomo administration’s handling of the pandemic in nursing homes, but some expressed disappointment when they learned of its narrow scope.

Because CRIPA does not apply to private institutions, the department’s data request was limited to “public nursing homes,” which it defined as those owned by the state or its subdivisions, such as cities and counties.

According to a registry maintained by the state Health Department, only 30 of New York’s 622 nursing homes fit that description – a mix of facilities owned by the state, New York City and various counties. They represent 7 percent of the state’s bed capacity.

Although spread around the state, they are not a representative cross-section. Fewer than half are located in the greater New York City region, where the pandemic was overwhelmingly concentrated, and none is in the Bronx, which was the hardest-hit part of the state.

To be clear, these figures are based on the state’s flawed counting methodology, which omits residents who died after being transferred to hospitals. This system has tallied just under 6,500 nursing home coronavirus deaths, but the true toll is likely to be thousands higher.

The stated goal of the federal inquiry in New York is to examine the impact of the Health Department’s March 25 guidance to nursing homes, which compelled them to admit patients regardless of any possible coronavirus infections – and barred homes from getting test results first.

Since the vast majority of patients admitted under that order undoubtedly went to private nursing homes, a probe focused only on public homes would give at best a limited, partial picture – and any findings wouldn’t necessarily apply to the state as a whole.

Early last month, the Health Department published its own report on coronavirus in nursing homes, making the case that most infections and deaths were unwittingly caused by staff and visitors – and that the March 25 order had no significant effect.

That report’s credibility was undermined by omissions of relevant facts and tendentious analysis – and widely criticized by independent experts.

Now a federal agency is embarking on a probe that, given its structural limitations, is likely to be flawed in its own way.

This leaves open the question of whether the state’s handling of the pandemic in nursing homes – and the deaths of thousands of elderly and disabled New Yorkers – will ever get the thorough, non-partisan analysis the victims deserve. 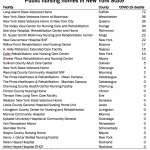