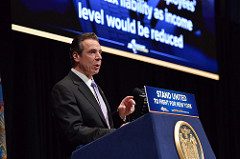 Coverage for about 700,000 enrollees appeared to be at risk after the Trump administration halted certain subsidy payments under the Affordable Care Act, which accounted for nearly a quarter of the Essential Plan’s funding, or about $950 million.

But the governor’s executive budget indicates that the program will continue as-is—and sketches surprisingly easy-sounding ways of making up for the lost money.

The Essential Plan is an optional benefit under the ACA that only New York and Minnesota exercised. It covers people just above the eligibility cutoff for Medicaid, from 138 percent to 200 percent of the federal poverty level. To pay for the coverage, Washington sends New York State the money that otherwise would have spent on tax credits and other subsidies if those same people had enrolled for private coverage through an ACA exchange.

But a federal court ruled that money for one of those subsidy programs, known as cost-sharing reduction or CSR, had not been properly appropriated by Congress—leading Trump to cut off CSR payments in October.

Cuomo’s budget proposal holds out hope that Congress might still restore the original funding. In fact, it projects that overall federal aid for the Essential Plan will grow, thanks to formula-driven increases from other ACA sources. The governor’s financial plan even shows the state’s contribution for the $3.9 billion program shrinking to $102 million for fiscal year 2019, about a quarter of what was previously estimated.

If CSR is not restored, the financial plan says the state can at least partially offset the loss with refunds it is owed by insurers who manage the program, cuts to premiums going forward, and other measures. The state could also dip into a contingency fund that Cuomo wants to establish to backfill as a hedge against cuts in New York’s federal healthcare funding.

As proposed by Cuomo, that contingency fund would filled with proceeds from converting non-profit healthcare companies to for-profit status, along with new taxes on health insurers and opioid manufacturers.

The financial plan further reports surprisingly low enrollment numbers for the Essential Plan: 684,000 for the current fiscal year, growing to 689,000 in 2019. Just last month, the New York State of Health said 719,000 people had signed up for the program.