There are several (dozens? hundreds?) of unanswered questions as the fallout from Andrew Cuomo’s resignation earlier today continues. Among those are questions related to his pension, some of which can be answered, sort of. 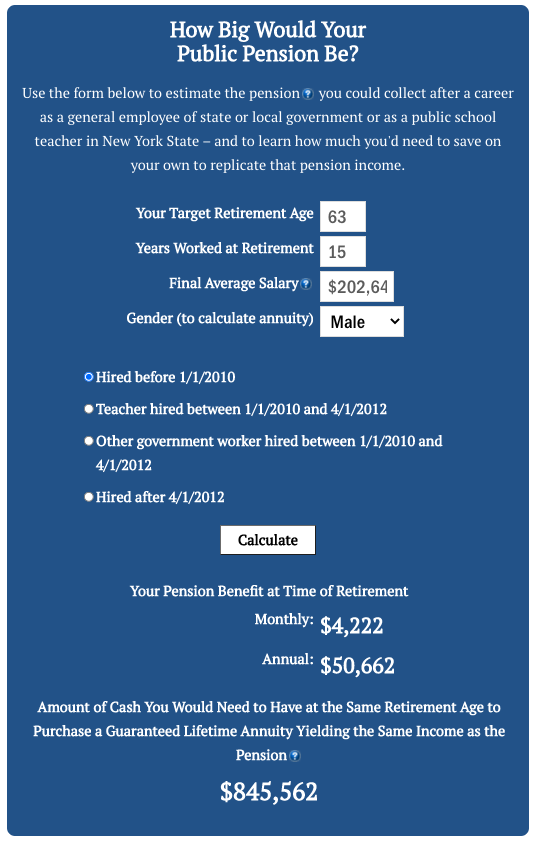 While exact employment records aren’t immediately available, we can estimate that Andrew Cuomo is entitled to at least a $50,000 pension benefit from the state of New York (thanks to the Empire Center’s handy pension calculator).

With his resignation, Cuomo has accumulated enough service credit—i.e., years of work on the state payroll—to file for retirement and start collecting his pension.

If he’s impeached … nothing changes. However, a pair of state legislators have introduced a bill that would change that. It would start the process of adding an amendment to the state constitution to automatically revoke the pension benefit of a public employee who was impeached. The authors made it retroactive, so it would affect Cuomo’s pension.

If he’s convicted (of a felony) … he might lose his pension. Under 2011’s Public Integrity Reform Act (hold your jokes) the pension benefit of a convicted felon could be reduced or revoked. The process is arduous as laid out by the Comptroller’s office: charges have to be filed, the defendant has to be convicted, following that a separate court action must be commenced, the State Comptroller verifies eligibility and estimated benefit, and, finally, the court may issue an order to reduce or revoke the benefit.

So if you’re wondering, without a felony conviction and several other steps, Cuomo would be eligible for his full pension, at taxpayer expense, for the rest of his life.