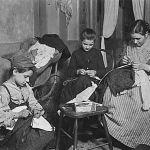 In his push for a statewide $15-an-hour minimum wage, Governor Andrew Cuomo frequently invokes fairness, justice and the rhetoric of President Franklin D. Roosevelt. But the pre-FDR Progressive Era advocates of the minimum wage had a worldview that today might best fit in at a Donald Trump rally.

The nation’s first state minimum wage laws, dating back to before World War I, applied only to women and children—both as a way of shielding them from exploitation and, not incidentally, of curbing job competition for adult male breadwinners.  (A 1923 U.S. Supreme Court decision overturning those laws was hailed by some feminists of the time as a victory over patronizing sexism.)

As Leonard’s book shows, the pro-minimum wage progressives of the early 20th century—including many of the formative figures in the burgeoning fields of political science and sociology—also were motivated by a desire to cull the labor pool. He writes:

The many left progressives who advocated the minimum wage … agreed that [it] would throw the least productive employees out of work or prevent their employment in the first place. But these reformers saw the removal of the less productive not as a cost of the minimum wage but as a positive benefit to society. Removing the inferior from work was not a regrettable outcome, justified by the higher wages for other workers. Removing the inferior from work benefited society by protecting American wages and Anglo-Saxon racial integrity.

Among those cited by Leonard as thought leaders on the issue was Paul Underwood Kellogg, an influential progressive journalist who, in the wake of World War I, would be among the founders of the American Civil Liberties Union. Like many other progressives, Kellogg agreed with a 1911 congressional commission finding that immigration from southern and eastern Europe was a danger to the American society and culture. But in place of the commission’s recommendation for a literacy test to screen immigrants, Kellogg came up with what he thought would be a more effective reform: an extra-high minimum wage, applying only to immigrants, which could serve as a sort of “tariff” on cheap labor from overseas.

Kellogg proposed that it be against the law for any business to hire an immigrant for “less than a living wage—say, $2.50 or $3 a day—until five years has elapsed and he has become a naturalized citizen.”  According to Leonard, that pay range started 50 percent higher than what the average low-wage worker earned in 1910 (i.e., in the same ballpark as the 67 percent hike Cuomo now is seeking).

In Kellogg’s own words:

It would not be the intent of result of such legislation to pay new coming foreigners $3 a day. No corporation would hire Angelo Lucca and Alexis Spivak for $3 a day as long as they could get John Smith and Michael Murphy and Carl Sneider for less.  It would be the intent and result of such legislation to exclude Lucca and Spivak and other ‘greeners’ from our congregate industries, which beckon to them now.

That passage didn’t come from a grimy handbill distributed at torchlit nationalist rallies. It was from an article by Kellogg in the July 1913 edition of The Annals of the American Academy of Political and Social Science—then, as now, a respected and influential professional journal.

The economists among labor reformers well understood that a minimum wage, as a wage floor, caused unemployment. while alternative policy options, such as wage subsidies for the working poor, could uplift skilled workers without throwing the least skilled out of work. Royal Meeker … a Princeton economist [and key advisor to President Woodrow Wilson] trained at Columbia … opposed subsidizing poor workers’  wages on these very grounds. Eugenically minded economists such as Meeker preferred the minimum wage to wage subsidies, not in spite of the unemployment the minimum wage caused but because of it.

In other words, the goal of a minimum wage was not to lift people out of poverty but to reserve jobs for better qualified native-born American men while discouraging the reproduction of lesser humans, with their “incompetence and unthrift.” Meeker and his ilk would not have been fans of the Earned Income Tax Credit.

Needless to say, such a base motive is the furthest thing from Cuomo’s mind. And while the early progressives took it for granted that a minimum wage would increase unemployment, Cuomo has insisted that a higher minimum wage will have no negative impact on employment opportunities for anyone.  All the same, unless the governor and his union allies want a strange new passenger to board their “Drive for $15” RV, he might want to hide “Illiberal Reformers” from The Donald.