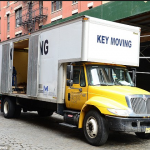 Most high-income New York City residents who left the city in 2012 moved to neighboring jurisdictions, according to a new analysis of federal Census data by the city Independent Budget Office (IBO).

An article in today’s New York Times cites the IBO numbers as evidence that (as the headline trumpets) “Wealthier New Yorkers Aren’t Fleeing the City for Tax Havens.”

That’s a real stretch. In fact, while New York State, New Jersey and Connecticut are not known for low taxes, they are tax havens compared to New York City, which imposes a 3.9 percent resident income tax on top of state income taxes.  Consider the following chart: 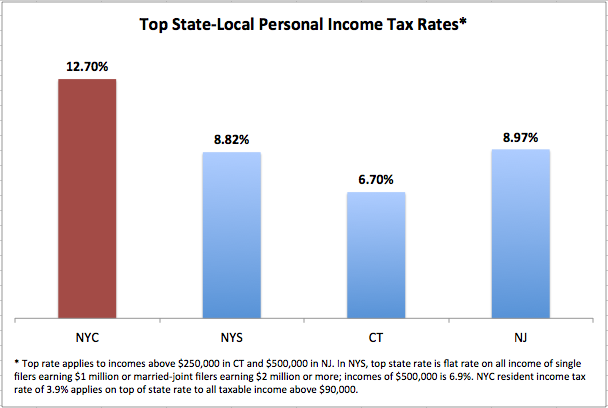 A couple with income of $2 million a year can save roughly $70,000 a year in city income taxes by moving to a New York suburb, $80,000 by moving to New Jersey, and $100,000 by moving to Connecticut. While a chunk of those savings could be eaten up by higher suburban property taxes, many such families also move to save on private school tuitions they pay in the city.

The difference in income taxes is only part of the story. New York City also imposes a unique 4 percent tax on the profits of unincorporated businesses and professional partnerships. This effectively more than doubles the local tax on the incomes of many investment bankers, lawyers, accountants, physicians and other professionals living in the city. The unincorporated business tax is not based on an individual’s residence; it can only be avoided by moving an entire firm out of the city. This was another factor behind the proliferation of hedge funds in Connecticut, where property taxes are also somewhat lower than in New York State or New Jersey.

IBO’s analysis — the latest in a series of occasional “New York City by the Numbers” features on its website — also suggests that California was the third most popular destination for high-income households, drawing 9 percent of those who moved in 2012. California is the only state with a higher top income tax rate (13.3 percent) than New York City’s. Both tax and Census data have long reflected movements of high-income households between the two states, which surely includes more than a few well-paid actors and entertainment moguls who find it necessary to be in one place or the other.

The Times article touting the IBO analysis begins by citing Sean Hannity’s threat to move from Long Island to Florida, and actor Gerard Depardieu’s tax-avoidance move from France to Russia, and then notes (further down in the story) that former Mayor Michael Bloomberg was critical of Mayor Bill de Blasio’s unsuccessful proposal to raise the city income tax. Oddly, however, it doesn’t actually quote anyone making what it calls “the frequent assertion that wealthy people reflexively flee New York City …  for low-tax states.”

In fact, the “frequent assertion” cited in the Times is not frequently made by serious critics of the city’s tax policies. No one familiar with tax or census data would claim there has been an exodus of high-income New Yorkers to ultra low-tax states. The main argument against New York’s higher income taxes is that they stifle growth and discourage investment in the city compared to competing jurisdictions that undeniably offer similar advantages at a lower cost.

The bottom line: any high-income New York City resident determined to save money on his or her  taxes can do so simply by stepping across the border in any direction.  The Times is hyping the IBO numbers to slay a straw man.

(By the way, the IBO bases its analysis on a Census Bureau microdata file that has very small sample sizes at the high end of the income scale. As a result, it is difficult to assess the statistical significance of a reported increase in migration by high-income households to neighboring suburbs between 2008 and 2012, or a decrease in migration to California during the same period, which is also shown by the analysis.)