The New York State Thruway Authority could need to raise tolls by nearly 5 percent to balance its financial plan next year—on the way to a 44 percent toll increase by 2018, according to the “toll revenue target” in the authority’s proposed 2015 budget.

In the continuing absence of a separate (public) financial plan for the $4 billion Tappan Zee Bridge project, the proposed budget reflects the impact the bridge will have on the authority’s finances over the next four years.

With no increases in toll rates, projected traffic increases can be expected to raise 2018 toll revenues by $29 million over the estimated 2014 level, the authority’s independent traffic engineer said in a memo contained in the budget (p. 29). But to maintain fiscal balance, the financial plan assumes tolls will rise by $334 million.  In 2015 alone, the traffic engineer projected toll revenues of $664 million, but the authority’s long-term plan (p. 45) indicates that nearly $31 million more will be needed to keep the plan balanced.

The chart below, based on numbers in the proposed budget, compares the toll target necessary to balance the authority’s fiscal plan to the toll revenues forecast by its traffic engineer based on current toll rates. 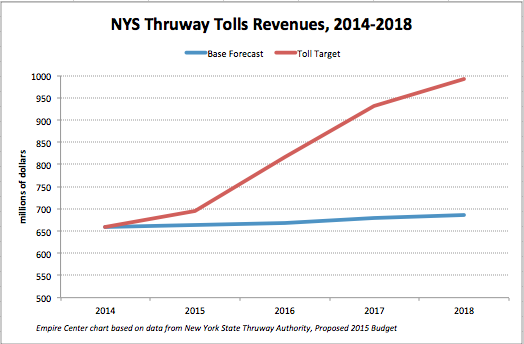 By 2018, the Tappan Zee project, also known as the New NY Bridge, will drive added annual costs of $281 million, including $143.4 million in debt service and a net increase of $137.3 million in deposits to a special facilities capital improvement fund earmarked for the bridge, the proposed budget shows.

Meanwhile, during the same period, the authority’s operating expenses are projected to rise by $33 million, or 11.5 percent, while net debt service on bonds issued for capital purposes other than the bridge will rise by $47.2 million, or 18.5 percent.

The bottom line: after factoring in projected natural growth in base tolls and other revenues,  92 percent of the projected net “toll target” increase by 2018 will be necessary to pay for the new bridge.

To hit the budget’s toll targets solely with money raised from Tappan Zee Bridge motorists, rather than imposing a toll increase throughout the system, the car toll on the bridge would have to rise next year to  $5.90 from the current level of $4.75, and ultimately to more than  $15 by 2018.

The numbers in the proposed budget do not mean the authority is obligated or planning to raise tolls. However, one way or another, the authority needs to balance its financial plan—and, as of now, assuming a toll hike on paper is the only way to do it.

The next Thruway Authority board meeting, at which the budget presumably will be taken up, is scheduled for Dec. 15 in Albany.