No. 5 on the list was New York City Health + Hospitals, which received a total of $46 million. (See table below. A full listing of New York recipients can be found here.)

Health + Hospitals is a safety-net system of 11 hospitals, five nursing homes and dozens of clinics that treat mostly low-income and uninsured patients, putting it on the front lines of the pandemic response. It includes Elmhurst Hospital in Queens, which drew media attention when it was overwhelmed with coronavirus patients in early April.

The city hospitals are relatively small individually, but taken together they have 3,200 beds and treated 143,000 inpatients in 2018.

That outstrips New York Presbyterian, the state’s largest hospital, which reported having 2,300 beds and treating 111,000 inpatients in 2018. Yet the city system received less than half as much money. 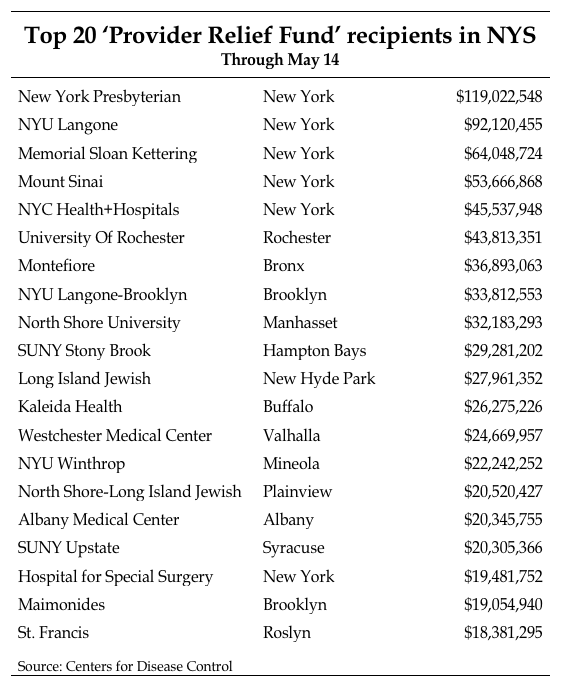 Missing from the list is State University of New York-affiliated University Hospital of Brooklyn, which the Cuomo administration designated as a coronavirus-only facility. Two other SUNY hospitals, in Syracuse and Stony Brook, received $20.3 million and $29.3 million, respectively.

These funding incongruities grew out of Washington’s rushed response to the coronavirus crisis. As part of relief legislation approved over the past two months, Congress appropriated $175 billion to reimburse providers, both for costs associated with handling infected patients and for revenue losses triggered by the shutdown and the cancellation of elective procedures.

In the name of moving quickly, the Trump administration chose to distribute an initial $30 billion without taking the time to develop a need-based formula. Instead, it simply paid each provider about 6.2 percent of whatever they had been paid by Medicare in 2019.

A drawback of this approach is that it tended to shortchange safety-net providers, such as the city-owned hospitals, which treat proportionally fewer Medicare recipients than private hospitals do.

The Medicare-based distribution also lacked any adjustment for the severity of the pandemic in New York compared to other states. To date, New York has seen almost 23 percent of the diagnosed cases and 31 percent of the deaths, but its providers have received just 7 percent of the relief funds.

On a per capita basis, New York’s funding falls in the middle of the pack – just above the nationwide average, but well below low-virus states such as Wyoming and South Dakota (see chart).

These allocations will change as HHS continues distributing funds. It distributed $20 billion with a goal, in combination with the first $30 billion, of allocating the combined $50 billion according to in proportion to total net patient revenue – a method that still tends to disadvantage safety-net hospitals.

Other money is to be targeted to providers serving the uninsured, to coronavirus hot spots regions and other categories.

So far, however, the agency’s listing covers payments through May 14 totaling $34 billion.

HHS apparently did not establish a minimum amount for qualified providers. The agency’s listing shows payments as small as $2 each to Nassau Audiological Products of Hempstead, Long Island, and to Paul R. Grout, a pharmacist in Medina, N.Y.

The Cuomo Administration Resists Sharing Records of its Vaccine Review

Beyond a Bailout, New York Needs Relief from Medicaid ‘Maintenance of Effort’ Rules