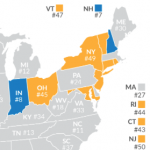 New York ranks 49th out of 50 states in the Tax Foundation’s 2017 State Business Tax Climate Index, released today. (New Jersey seems permanently mired in last place, so we’ve got that going for us, which is nice.)

The Empire State’s overall ranking on the widely noticed index is unchanged from last year, has ranged between 48th and 50th for a decade now, and has been 49 for most of Governor Andrew Cuomo’s tenure.

The good news: within the five major tax categories weighed for the Index, the Empire State has improved its corporate tax ranking to 7th best, up from #20 in the rankings for 2010. The improvement reflects corporate tax reductions and reforms enacted at Cuomo’s initiative in 2014.

When New York’s Business Tax Climate ranking dropped to 50th in 2013, then-Secretary to the Governor Larry Schwartz dismissed the respected, nonpartisan Tax Foundation as “a right-wing think tank that has a personal word view and manipulates data to support that world view.” But a year later, Schwartz reportedly lobbied the Tax Foundation to ensure favorable recognition of the corporate tax changes. The Foundation—which is, in fact, objective and non-political—duly gave Cuomo credit, despite the earlier insult.

Here’s the blurb from the new Tax Foundation report:

Two years ago, New York policymakers enacted a substantial corporate tax reform package that continues to phase in, with this year’s changes improving the state’s rank on the corporate income tax component from 11th to 7th. This year, the state lowered its corporate income tax rate from 7.1 to 6.5 percent and reduced the capital stock tax rate from 0.15 to 0.125 percent. The capital stock tax is on a path to repeal, which can be expected to yield improvements on the property tax component in future editions of the Index.

New York’s overall Index ranking continues to be weighed down by some of the nation’s heaviest and most inefficiently structured personal income taxes, sales taxes, unemployment insurance taxes and property taxes. The phasing in of the corporate reform may move the state up another notch, but a further improvement will depend on the fate of the temporary “millionaire tax,” now scheduled to sunset at the end of 2017.

Cuomo and the Legislature agreed earlier this year to a multi-year reduction in “middle class” PIT rates, but as an economic competitiveness matter, the Tax Foundation puts greater stock in marginal rates. It also urges inflation “indexing” of tax rates, which was actually (inexplicably) repealed as part of this year’s tax cut.

As long as New York’s tax rate on incomes starting at $1 million stays at 8.82 percent—which equates to 12.7 percent for New York City residents—the Empire State can be expected to remain near the bottom of the annual business tax climate rankings. Indeed, in a sneaky wrinkle frowned on by the Tax Foundation, New York’s tax code has a quirk that applies top rates in upper brackets as flat rates on all taxable income, making the resulting tax bill that much higher.

“While there are many ways to show how much is collected in taxes by state governments, the Index is designed to show how well states structure their tax systems, and provides a roadmap for improvement,” the Foundation says.

The Tax Foundation and the Empire Center described what such a roadmap would look like in a December 2013 joint statement, “Five Steps to Reforming New York’s Tax Code.”*

* Since then, two of those steps—permanent enactment of middle-income tax cuts, and an increase in the state Estate Tax exemption—have been enacted. But the Estate Tax measure was incomplete, leaving a confiscatory tax “cliff” for the smallest estates still subject to the tax.