New York was a net loser of income tax filers to other states even in the five years leading up to the pandemic disruption of 2020, according to a report issued today by state Comptroller Thomas DiNapoli’s office.

“Moving In or Moving Out?” was the question posed by the title of the comptroller’s report on New York taxpayer migration trends.

The answer: on net, they’ve been moving out.

Based on data from the state Department of Taxation and Finance for tax years 2015 to 2019, the comptroller’s office found that the number of nonresident and part-year taxpayers grew more quickly than full-time residents – by 13.6 percent and 4.3 percent, respectively, compared to 3.1 percent for residents. The trend is illustrated in this chart from the report:

An important related finding focuses on part-year residents, defined as those who moved either into or out of the state during a given year. “Of the approximately 286,000 part-year resident filers in 2019, over half (55 percent) moved out of New York, a consistent trend since 2015,” the report said. On average, 28,700 more taxpayers left the state than moved in every year from 2015 to 2019, the comptroller’s data show, as illustrated below. 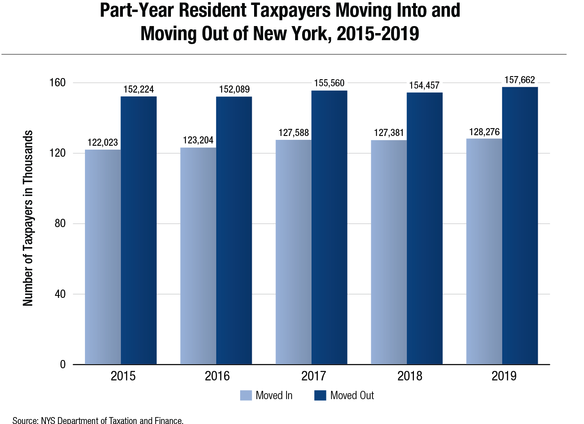 The comptroller’s report adds to existing evidence of long-term erosion in New York’s resident tax base preceding the recession. In fact, there’s been a steady drop in the resident share of income millionaires in the tax base for more than a decade, as documented by state data cited in the Empire Center’s 2021 testimony to the legislative fiscal committees.

Federal data released late last year showed that, as of 2019, New York’s share of all U.S. income taxpayers with income above $1 million dropped to 9.9 percent—down from 12.7 percent as of 2010, the year after the state enacted a supposedly temporary and ultimately permanent higher rate on millionaire earners.

And all this took place before taxes on New Yorkers earning $1 million or more were jacked up significantly by the FY 2022 budget, with the top rate in New York City hitting 14.8 percent, highest in the nation (and no longer deductible on federal returns).

The incentive to move

While nonresidents are still taxed on income earned from employment and business activities within New York, their capital gains income (from sale of stocks, bonds and other financial instruments as well as tangible real estate and personal property) are taxed only where they live. The state Department of Taxation and Finance is known for rigorously enforcing “domiciliary” rules, giving rise to a cottage industry of legal advisers who help prosperous out-migrants check all the boxes needed to demonstrate that they are, indeed, lacking a “permanent place of abode” in New York and spending fewer than 184 days a year in the state. (And yes—there’s even an app for that.)

Albany’s clamorous army of progressive advocates (and their legislative allies) no doubt will wave off the comptroller’s findings as insignificant, pointing instead to a continuing recent upsurge in state personal income tax receipts, which are coming in above Governor Hochul’s projections at the start of the year.

But the short-term PIT trends are in all likelihood transitory, reflecting a combination of unusually large finance sector bonuses (which are forecast to drop next year), the strong stock market of mid-2020 through 2021, and—last but not least—added payments tied to the pass-through entity tax (PTET), which (through refundable credits) effectively restores the federal state and local tax (SALT) deduction of taxes paid on the income of unincorporated firms and partnerships. And the Wall Street bear market spells big trouble for a state revenue forecast that assumed another year of gains in the S&P 500.

As underscored by the comptroller’s report, the longer-term trend—preceding the pandemic and the 2021 tax hikes—clearly points in one direction, and the pandemic certainly won’t reverse the flow. The sharply higher tax rates imposed on New York’s highest earners will only provide an incentive for higher migration. And if the work-from-home trend prompts New York employers to open more “bona fide” satellite offices in New Jersey and Connecticut suburbs, the significant chunk of New York taxes paid by former commuters from those states also will decline.