On Tuesday, the Katonah-Lewisboro Board of Education voted 7-0 to give their superintendent’s job to Paul Kreutzer, currently superintendent of the New Berlin School District in Waukesha County, Wisconsin. 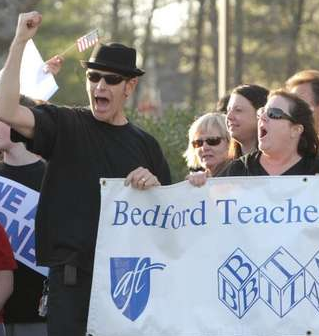 From the Journal News report:

Since it got out that the school district was likely to hire Kreutzer, controversy has grown steadily over his support of the Wisconsin bill to strip most public workers of collective bargaining rights. Kreutzer spoke at a news conference with Gov. Scott Walker after the bill passed, saying the changes would help him retain teachers.

The article’s reference to the “stripping” of collective bargaining rights is standard fare in news coverage but exaggerates the impact of Walker’s changes. In fact, teachers and other government workers in Wisconsin retain the right to organize unions and to collectively bargain with their employers on much the same basis as unionized federal government employees. And unlike federal unions, Wisconsin unions will continue to bargain wages (subject to an inflation cap that could be overridden in referendums).

In recent interviews, Kreutzer said he was speaking as a representative of the school board and that he would not bring the issue with him from Wisconsin. After the controversy erupted, the Katonah-Lewisboro school board arranged a public forum with Kreutzer for before the planned vote Tuesday.

The protest carried over into the forum, with emotional speeches by teachers.

He puts democracy above collective bargaining?  No wonder this guy is controversial.

Kreutzer was given a five-year contract with a salary of $245,000, which would put him in the middle of the pay pack among the 37 school superintendents for whom the State Education Department (SED) has reported salaries. The median teacher salary in Katonah was $110,600 as of 2010-11, according to SED.