County and Municipal Payrolls in NYS 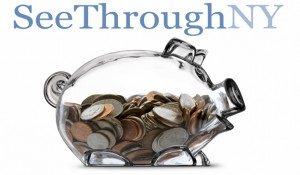 Local government is a labor-intensive business, and employee compensation is the single biggest element of most municipal budgets. The 2011-12 edition of What They Make, the Empire Center’s annual report on public payrolls, allows New York taxpayers to compare this key element of local government costs around the state.

The salary information in this report is based on data submitted to the New York State and Local Retirement System by all local governments other than New York City. The county and municipal data do not include job titles, which are not reported to the state comptroller, although uniformed police officers and firefighters are classified in a separate retirement system.

The county and municipal payroll database consists of all full-time and part-time workers enrolled in the pension system at any point from April 1, 2011 through March 31, 2012, including employees who left or retired, and those hired during the year. Salary totals, included in the averages, include overtime and pay for unused sick and vacation time. It is important to note that the figures do not include pension contributions, health insurance, and other fringe benefits, important elements of compensation that can easily amount to 30 to 40 percent of salary costs.

This report provides a summary analysis of payroll information, broken down into two categories –“General Employees” and “Police and Fire.”[1]. Below is a ranking of the highest average slaries grouped by employer type — led by Clarkstown’s 163 police and fire employees at an average salary of $179,689. Other tables available in the PDF highlight: 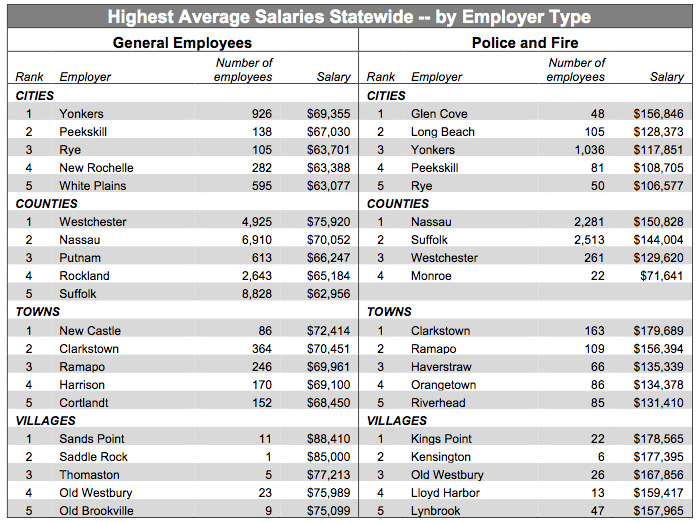 Information on individual public employee salaries can be found at the Empire Center’s transparency website, www.SeeThroughNY.net. The site includes a searchable database of 165,554[2] people who collected a total of more than $9 billion in pay from 1,509 city, county, town, and village governments outside New York City during the pension system fiscal year ending March 31, 2012.

Download the complete report “What They Make,” by clicking here.

1. A category labeled “Special Districts,” including library and fire districts, exists on the SeeThroughNY.net database, but is not included in this report because the information provided by the comptroller does not easily allow for such categorization.
2. Please note that this number may count the same person multiple times if they are listed more than once in the data.