The variations in school staffing since 2000-01—and the steady downward tumble of enrollment in the same period—are shown in Figure 1, below. 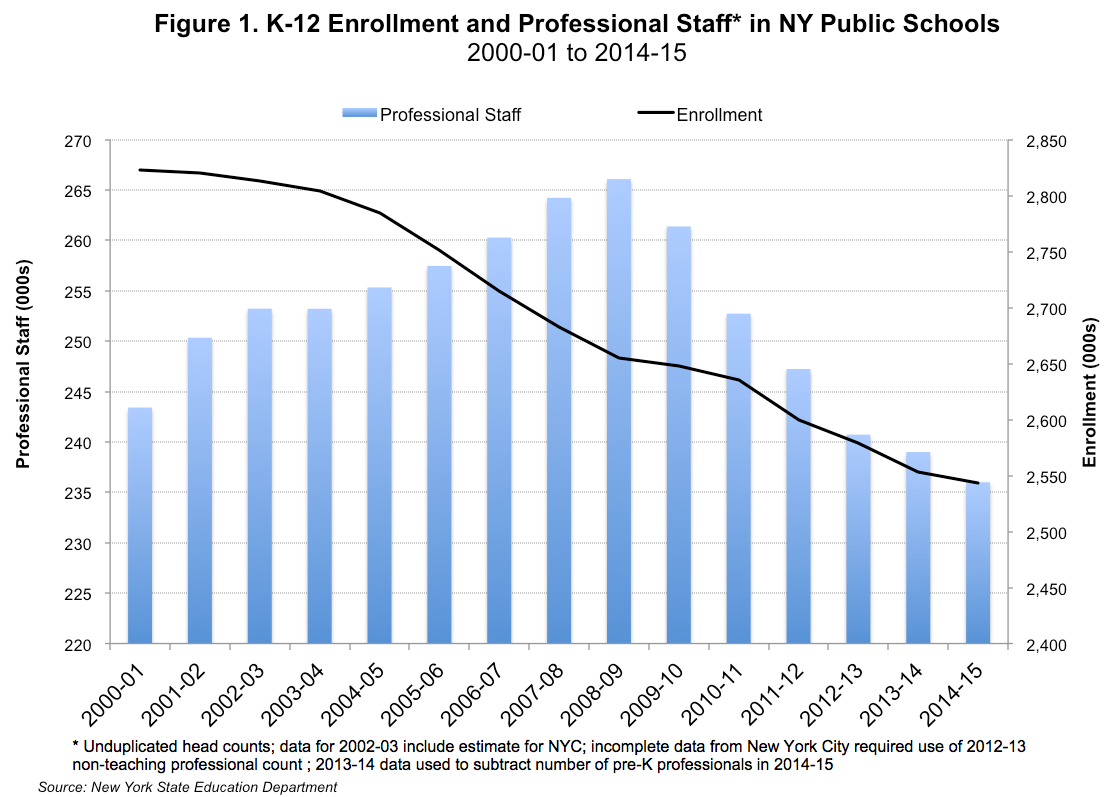 As shown below, upstate schools experienced much larger enrollment decreases—and also shed staff. But even upstate, the number of professional staffers decreased at just over half the rate at which the number of pupils decreased.

There is also a sharp difference in trends between teachers and other professionals. The number of teachers in downstate districts is down only slightly over 2000-01 levels, and has dropped sharply upstate—yet the number of non-teachers has increased at double-digit rates in every region.

What is the right ratio of teachers and non-teaching professionals to students? The data do not immediately suggest a correct answer—but it’s one that should be answered as lawmakers try to understand the true nature of the funding crisis claimed by many school leaders. 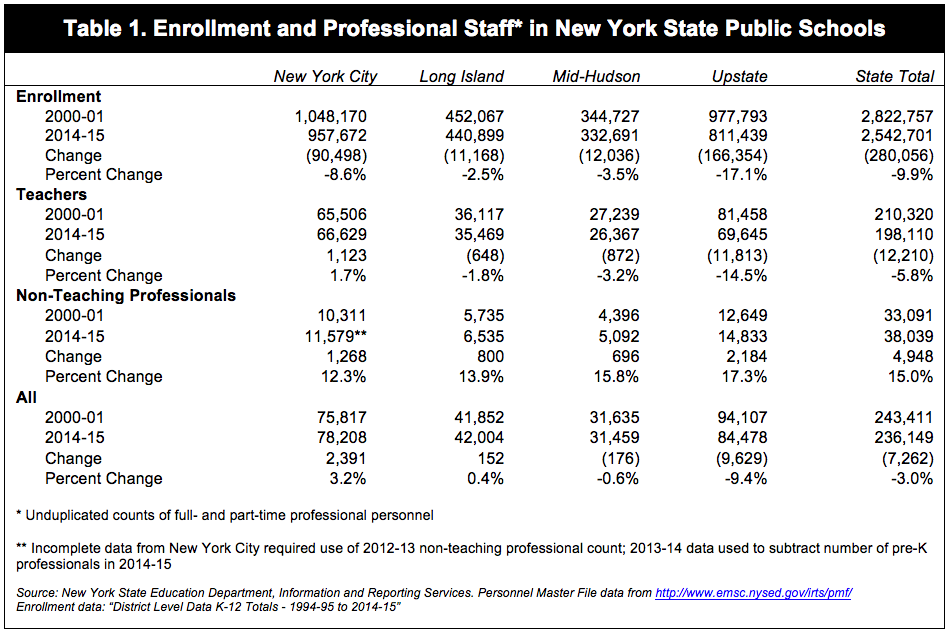 As student enrollment declined and school staffing rose and fell between 2000-01 and 2014-15, median salaries for classroom teachers increased by more than 40 percent. The growth continued even after school finances were hit by shockwaves of the Great Recession, which officially began in late 2007, and the global financial crisis, which set off a near panic on Wall Street in the fall of 2008. 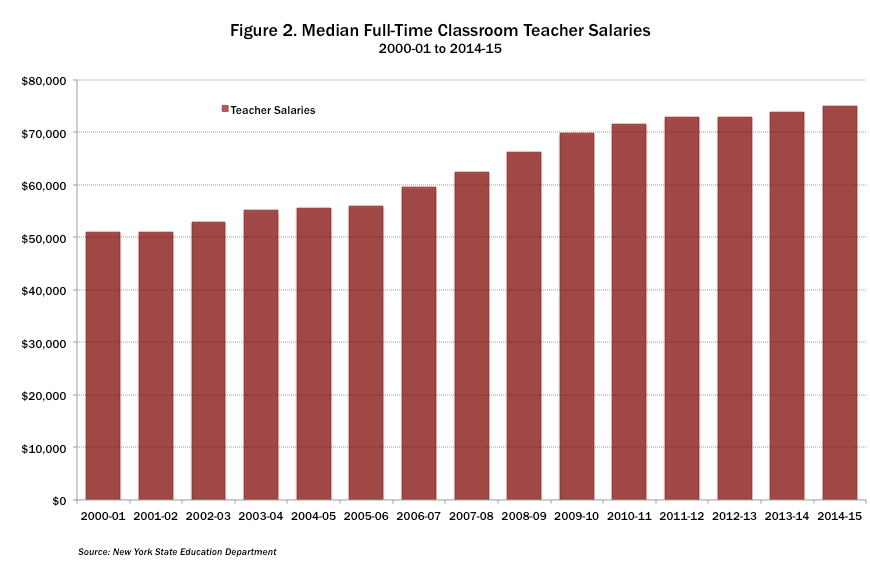 Salaries vary by region, reflecting disparities in wealth and living costs between upstate and downstate. As shown below, the medians for teachers on Long Island and in the Mid-Hudson Region have reached the six-figure level. 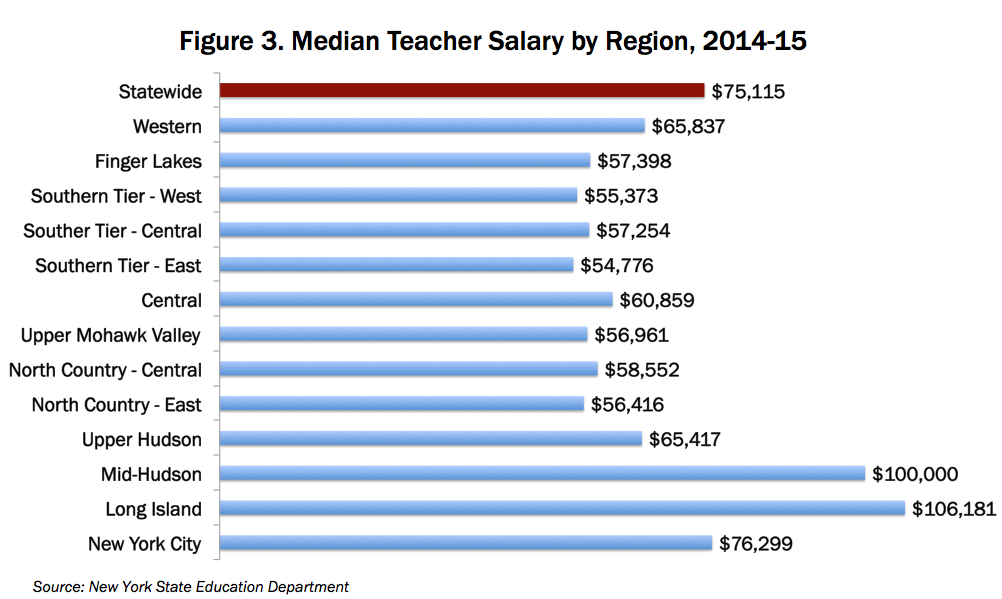 All regions saw their median salaries increase since 2008-09, when staffing levels began declining. The smallest increase was observed in New York City, where the median salary increased 9 percent during the six-year period. At the same time, Long Island’s median teacher salary grew by 24 percent, the highest rate of any region.

Schools reduced headcounts through attrition by not hiring replacements for teachers who retired or left for other reasons, and by conducting layoffs subject to union “last in, first out” rules that effectively targeted younger teachers. As a result, SED data show, the median experience level of teachers statewide rose after the recession began to strain budgets. Under most teacher contracts, a few added years of experience automatically translate into a significant salary boost, even when contracts have expired and base salaries are frozen. The extent of those increases is illustrated in Table 2, below.

The full extent of the continuing rise in school spending since the recession was not inevitable or unavoidable. It was the result of (a) increasing teacher compensation costs driven largely by automatic pay raises, and (b) continued relatively high levels of staffing, relative to enrollment, especially in non-teaching titles. State law clearly is a major factor in the first trend, while the second needs to be more closely examined.