The plan adds to the pressure on the state’s Catholic bishops, who control Fidelis, to transfer part of the proceeds of the plan’s pending $3.75 billion sale to the state treasury, as Cuomo is also demanding in last-minute budget talks with the Legislature.

Politico New York reported Thursday that a negotiated settlement between the bishops and Cuomo is “nearing the finish line.”

The governor’s proposal on excess reserves, recently floated in budget negotiations, would apply only to non-profit prepaid health services plans, of which there are five. In that group, Catholic Church-affiliated Fidelis and New York City-operated MetroPlus have the largest reserves.

Among the 16 insurers that enroll Medicaid recipients, however, there are at least four other plans with higher reserves as a percentage of premium revenue, as shown in the chart below. 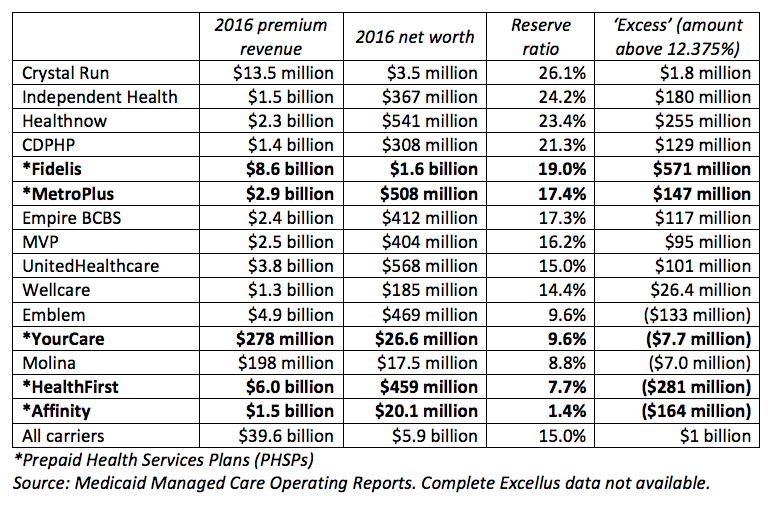 Health insurers are required under state laws and regulations to keep a portion of their money in reserve, to make sure they can pay their bills even in the face of a surge in claims or a loss of revenue. The minimums vary according to type of plan: Medicaid plans are expected to have reserves equal to 8.25 percent of revenue, or about one month’s worth of cash. The ratio for commercial plans is 12.5 percent, or six-and-a-half weeks of cash.

Under the governor’s proposal, the state would be entitled to expropriate “excess” funds from Medicaid PHSPs with reserves that exceed 150 percent of the minimum. Draft language provided to legislative negotiators does not say exactly how the excess would be calculated, leaving details to be determined by the health commissioner.

The chart above is based on a hypothetical threshold of 12.375 percent, which is 150 percent of the Medicaid minimum. By that standard, 10 Medicaid managed care plans of all types would potentially have accumulated excess reserves as of 2016, according to data reported by plans to the Health Department. Of that group, only Fidelis and MetroPlus are PHSPs that would be subject to expropriation.

Cuomo also recently proposed for the state to claim 80 percent of the proceeds when a non-profit health plan becomes a for-profit company. The only known example of that is the Fidelis. As Politico reports, the plan’s deal with Centene includes a clause allowing Fidelis to cancel if the state claims more than 10 percent of the sale price, or $375 million.