New York State’s main pension fund investment pool earned 10 percent in its third quarter and has gained nearly 30 percent since the end of its 2020 fiscal year, according to state Comptroller Thomas DiNapoli, the fund’s sole trustee.

As of December 31, DiNapoli reported, the Common Retirement Fund stood at $248 billion, up from $194 billion as of last March 31, a net increase of $54 billion that reflects a combination of investment earnings, benefits paid out, and contributions by employers and employees during that period. The Fund supports pensions paid to members of the New York State and Local Retirement System, which covers all state and local government employees outside New York City except teachers and administrators.

With 55 percent of its assets invested in publicly traded domestic equities, the pension fund rode a stock-market roller coaster from last February’s all-time highs, to a sickening vertical drop in the early stage of the pandemic last March, breaking back to a series of new highs since late last summer.

From the comptroller’s news release:

“Continued growth in the stock market has added to the state pension fund’s dramatic increases this year,” DiNapoli said. “More importantly, given the ongoing market volatility, our pension fund is strong and well-diversified and ready to meet any ups and downs. Investment gains will remain fragile until we overcome the COVID-19 pandemic and see more federal stimulus bolstering the broader economy. We will continue to manage investments with caution and with a long-term perspective that has been the foundation of our success.”

He should have inserted a period after the word “fragile,” given the extraordinarily heavy debt load falling on the post-pandemic economy.

The Common Retirement Fund bases all of its funding calculations on the assumption that it will earn an annual return of 6.8 percent—which, in turn, is the discount rate used to calculate the value of benefits that must be paid in the future.

Even if there is no further improvement in stock prices over the next seven weeks, the pension fund’s return in the fiscal year is on track to exceed 30 percent, a marked reversal of last year’s 2.66 percent loss. In that case, as illustrated below, something truly noteworthy will have happened: the pension fund’s actual 20-year total return on investment will have finally caught up with and slightly surpassed the system’s long-term return assumptions for the first time since just before the Great Recession bear market of 2007-09. 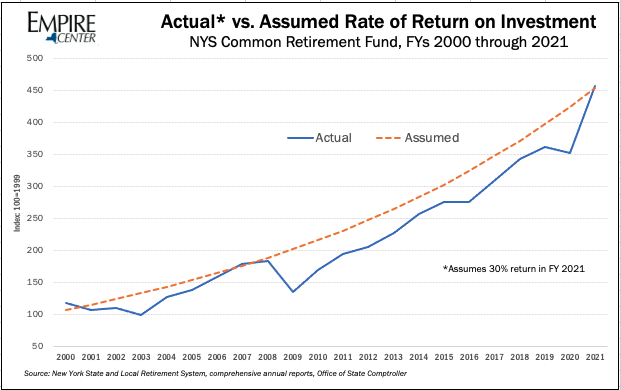 In reality, of course, roller coasters don’t climb indefinitely, any more than trees keep growing to the stratosphere. The current surge in stock prices won’t last. The only question is whether it all ends in a crash, or a mere 10 percent correction followed by a new bull market, or the kind of long-term stagnation experienced in the 1970s, when the Dow gained less than 5 percent before adjusting for inflation.

When the pandemic-induced tidal wave of Federal Reserve liquidity is exhausted and all the money in the Biden administration’s forthcoming $1.9 trillion stimulus federal stimulus bill has been spent—some of it, inevitably, to boost already generous compensation levels for public employees in New York—the economy and financial system could be left with a tremendous hangover.

In fact, all things considered, this would be a good time for New York’s state and local pension fund to begin ratcheting down its reliance on stocks and re-setting the assumptions used for funding purposes. It should:

The current discount rate of 6.8 percent is low by American pension fund standards—but not compared to more stringently regulated American private single-employer funds, or to public funds in other countries. For example, Canada’s highly regarded Ontario Teachers Pension Plan uses a discount rate of 4.65 percent. The Society of Actuaries has recommended that public pension discount rates “should be based primarily on the current risk-free rate plus explicit risk premia or on other similar forward-looking techniques,” which in current conditions would translate into a rate of 4 to 5 percent.

In the meantime, taxpayers and public employers, go ahead and enjoy the ride—but hold onto your hats.