The paradox was highlighted on Tuesday when Governor Hochul ordered a halt to elective procedures in the Finger Lakes, Central New York and the Mohawk Valley, where the recent omicron surge has been relatively mild so far, because hospitals in those regions had collectively exceeded 90 percent of their capacity. 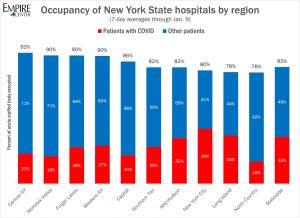 The contrast raises questions about the usefulness and accuracy of the metrics the state is using to track the pandemic in hospitals.

Among the many data points collected by the state, hospitals are required to report on a daily basis both the number of “staffed acute care beds” they have available, and how many of those beds are occupied by patients, whether diagnosed with COVID or not.

When more than 90 percent of beds fill up – either for an individual hospital or in aggregate for all hospitals in a region – the Hochul administration’s policy calls for them to suspend non-emergency procedures as a precaution against running out of space. This can be financially costly for hospitals, because elective procedures are an important source of revenue.

The capacity data from different regions have shown a stark contrast. Upstate, COVID hospitalizations have remained relatively low and there has been no significant increase in the overall number of patients. What appears to have caused the capacity crunch is a 23 percent drop in the number of available beds, which hospital officials attribute to a loss of staff (see second chart).

Downstate, meanwhile, COVID hospitalizations have spiked dramatically, but the state’s data indicate that the number of available beds has held relatively stable and occupancy rates have remained comfortably below 90 percent in most institutions (see third chart). 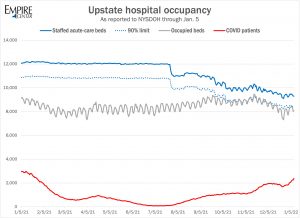 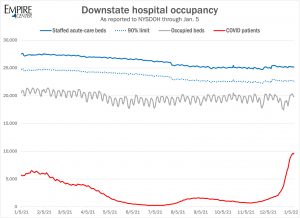 One possible factor behind these regional differences could be the state-imposed vaccine mandate for health-care workers, which was ordered by former Governor Andrew Cuomo and implemented by Hochul – and which might have been less popular upstate than downstate.

However, the number of upstate beds started its noticeable downward trend on July 25, three days before Cuomo announced an initial mandate for employees of state-operated hospitals.

That said, some workers later left their jobs rather than accept vaccination, and upstate hospital officials warned that requiring workers to get a vaccine booster – as a state panel voted to do on Tuesday – could exacerbate their staffing shortages.

There also could be regional differences in how hospitals report their data to the Health Department. According to hospital workers quoted in Crain’s New York Business this week, some New York City institutions have been overstating how many empty beds they have available – possibly to avoid triggering a shutdown of elective procedures.

Another possible issue is the growing number of patients who test positive for COVID-19 after entering the hospital for another reason. These “incidental” cases – which account for more than 40 percent of the state’s COVID inpatients – would have made New York City’s hospitalization surge appear bigger than it really was.