New York’s post-pandemic recovery continued to lag far behind the national average in January, with total private employment in the Empire State remaining a million jobs below the level of a year earlier.

The latest establishment payroll headcount from the state Labor Department—reflecting an important annual “benchmark” re-estimate based on employer unemployment insurance filings—also shows the state’s job count took a bigger dip than originally reported in December, when Governor Cuomo tightened some restrictions in response to a second wave of coronavirus infections. The updated December number was down 1.062 million, reflecting a net loss of nearly 100,000 more jobs that previously estimated.

In January, New York’s private businesses employed a total 7,160,900 people—down 1 million from the same month in 2020, and the lowest for the month since 2012, according to the Labor Department’s monthly jobs report. That translated into a year-to-year drop of 12.3 percent—roughly double the national average decline of 6.2 percent during the same period.

After plunging by an incredible 1.9 million in April 2020, private employment in New York recovered strongly through the spring and summer months. Since September, however, there has been no net improvement in the year-to-year jobs change, as shown below. 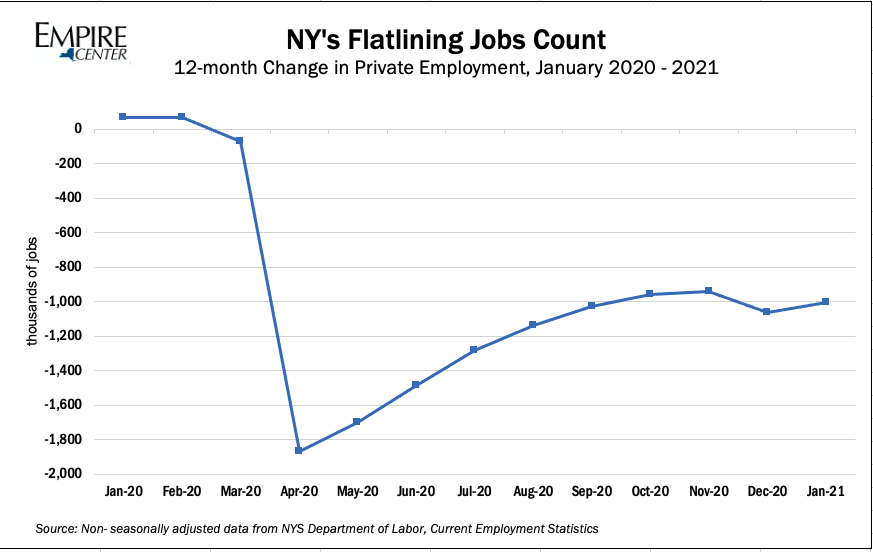 The epicenter of the jobs deficit remains New York City, which accounts for nearly 63 percent of the net statewide jobs loss, and the downstate suburban counties of Long Island and the lower Hudson Valley. However, all but two upstate metro areas—Glens Falls and Watertown-Ft. Drum—also were lagging the national year-to-year jobs recovery rate as of January. The Buffalo, Syracuse and Elmira areas all remained down nearly 10 percent from 2020, while the Rochester and the Albany-Schenectady-Troy metros were at least closer to the U.S. norm with net declines of just over 7 percent (see table below). 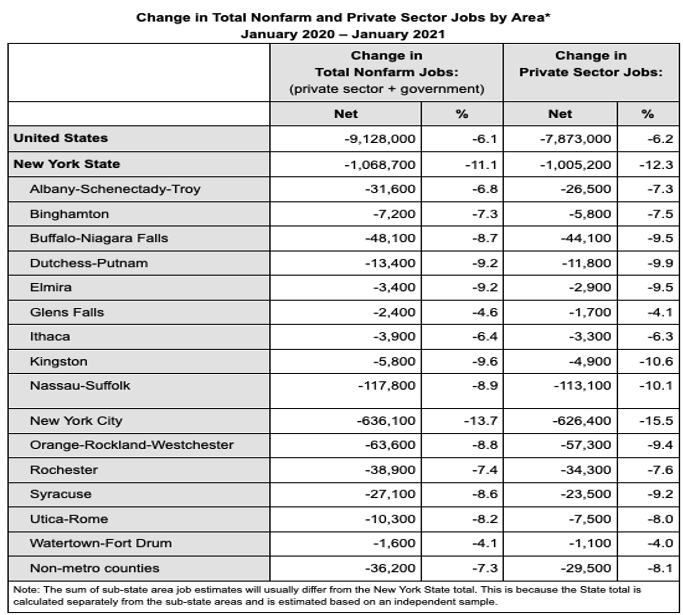 New York’s recovery from the pandemic economic crash remains both weak and fragile. Increasing vaccinations and a decrease in COVID infections and hospitalizations are signs of hope for a return to something resembling economic and social normalcy by late summer (or fall?), but the state’s economy—especially New York City—has very, very far to go. Unfortunately, there remains little reason to quarrel with Budget Division projections that predict employment will not recover to pre-pandemic levels for at least two more years.