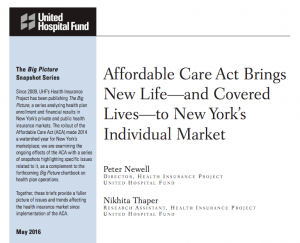 The United Hospital Fund has just published a progress report on New York’s health insurance exchange that, among its other findings, raises an interesting concern:

Is the Cuomo administration’s effort to save money on health-care coverage for certain non-citizens driving up Obamacare premiums for everyone else?

At issue is the Essential Plan, a very low-cost state health plan launched this year that’s available to people under 200 percent of the federal poverty level (or $40,320 for a family of three). New York and Minnesota are the only two states to offer this optional benefit under President Obama’s Affordable Care Act. The state projects enrollment of 473,000 for fiscal year 2016-17.

For those who are eligible, Essential Plan can be a great deal: Depending on income, premiums are either $20 per person per month or zero, and there are no deductibles and tight limits on out-of-pocket expenses.

Another group that appears to benefit is New York taxpayers — by shifting certain lawful immigrants out of Medicaid (where the state must pay 100 percent of the tab) and enrolling them in the Essential Plan (where the federal government picks up about 85 percent of the cost).

The state must chip in, both for non-citizens and for low-income citizens who join the Essential Plan. But it saves so much money on the non-citizens that it expects to come out $645 million ahead.

There is one group, however, that potentially stands to lose: Consumers who buy insurance through the New York State of Health, the state’s Obamacare exchange. Many of those signing up for the Essential Plan formerly bought insurance through the exchange, and they tend to be a relatively young and healthy group. Their departure is leaving behind an older, sicker risk pool, which is adding to upward pressure on premiums for individuals and small groups, according to the United Hospital Fund report:

An extensive modeling study commissioned by New York State estimated a $100 per year increase in individual [exchange health plan] premiums if the [Essential Plan] was adopted, and health plan 2016 rate filings reflected varying impacts of splitting off this group. Empire BCBS estimated in its filing that removing individual members eligible for the [Essential Plan] in 2016 would increase the morbidity of the remaining market by 4.3 percent, and UnitedHealthcare HMO included a 3 percent upward adjustment for its individual premiums. In filings for 2017, MetroPlus noted a 24 percent increase in its index rate, a key building block in developing premiums, after removing its Essential Plan members, and Fidelis Care cites an “upward pressure on premiums” due to removing BHP members and their better claims experience from rate calculations.

The effect was not unexpected. A 2012 modeling study by the Urban Institute, commissioned by the state Health Department, projected that creating an option like the Essential Plan would boost premiums for other exchange buyers by an average of $100 a year. The study further predicted that 24,000 people would drop coverage as result.

This startup of the Essential Plan is one of several factors behind rising prices on the exchange, including an increase in underlying medical costs, the expiration of federal insurance subsidies, and accumulated losses from previous years. Last month, plans selling individual and small group coverage requested rate hikes averaging 17 percent.

The Department of Financial Services is not likely to approve those full amounts. Federal tax credits and the ability to switch to lower-cost coverage will further cushion the impact of price spikes for many customers.

Still, the Essential Plan represents a trade-off: By making coverage more affordable for one group, the state is driving up costs for another.

Another potential problem cited by the United Hospital Fund report is the relatively high claims of customers who buy exchange plans outside of the normal enrollment period—possibly a sign that some are enrolling just in time to pay for expensive treatment, then dropping coverage afterwards.

Overall, however, the state’s individual market is in much better shape than it was before the advent of the ACA. Then, New York law required plans to offer individual coverage to all customers, regardless of pre-existing conditions, and to charge the same price to all buyers of individual coverage. This caused a so-called adverse selection spiral: Companies raised prices to cover the sick, which drove healthy patients away, which caused prices to rise still further.

The ACA dramatically changed the situation by creating a more competitive marketplace for insurance, offering tax credits for lower-income individuals who bought coverage, and levying a modest penalty for those who did not.

In a sign that premiums dropped too low—under pressure from regulators at the Department of Financial Services—the report found that 18 plans lost money in the individual market in 2014 (with losses totaling $169 million), while only six plans reported gains (totaling $70 million).