New York’s health plans are pressing for dramatically higher premiums in 2017, according to data posted today by the state Department of Financial Services.

The rate requests, submitted to the department on May 9, reflect financial turbulence in the insurance market as the Affordable Care Act enters its seventh year. The requests – which DFS has the power to reduce – cover individual and small-group policies taking effect next January, including all coverage sold through the state’s ACA purchasing exchange, New York State of Health.

For individual coverage, the companies are seeking rate hikes as high as 89 percent and as low as 6 percent, with a weighted average of 17 percent.

For small group plans, the requests range from 67 percent to 5 percent, with a weighted average of 12 percent. 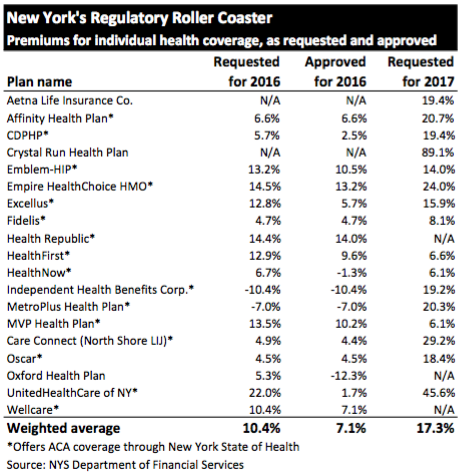 Consumers may or may not ever pay these proposed prices. DFS has the last word on premium increases, and it has aggressively used its authority to limit rate hikes over the past two years.

Still, this year’s requests for individual coverage are significantly larger than what companies sought last year for 2016 plans (an average of 10.4 percent), and two years ago for 2015 plans (an average of 12.5 percent). The average request for small group coverage is roughly in line with the two previous years.

DFS may temper its rate-cutting in light of the collapse last year of Health Republic Insurance of New York, an insurance co-op founded under the ACA. Although the company charged some of the lowest rates the state and lost money throughout its existence, DFS lowered its premium requests in both 2014 and 2015 – the second time coming just weeks before it shut the company down as insolvent.

The upward pressure on premiums in this cycle is partly explained by national trends. The underlying cost of medical care, especially prescription drugs, is surging again after a period of unusually slow growth. Insurers are finding that people enrolling for coverage under the ACA are generally sicker and more expensive than projected. Plans are also seeing “churn”: Because the ACA bars insurers from denying coverage for pre-existing conditions, consumers can enroll when they need expensive treatment then drop coverage as soon as they get better. Also, the law’s training wheels are coming off, with certain federal subsidies for insurers expiring as of Dec. 31.

“The overall trend is going to be higher than we saw previous years,” a national spokeswoman for the industry, Marilyn Tavenner of America’s Health Insurance Plans, said in a recent interview.

Under the so-called prior approval law enacted in 2010, DFS has broad authority to adjust plans’ premium requests for individual and small group insurance, and the Cuomo administration has not been shy in using that power. It cut the rate hikes requested for 2015 individual coverage by more than half, on average, and cut them by a third the next year – without publicly stating the rationale for the reductions.

In announcing its decisions, DFS did note that it was holding the overall growth of individual premiums below the medical inflation rate – which, on its face, would be unsustainable over the long term.

These decisions can lead to higher rate requests in two ways:

First, many if not most plans reported losing money on individual and small-group policies under the state-imposed rates for 2015 and 2016. They’re looking to make up those losses now – as they must to protect their long-term viability.

Second, the approval process gives companies an incentive to request large increases, knowing that DFS is likely to reduce what they propose.

Pointing to Health Republic as a cautionary tale, insurance officials charge that the prior approval process is arbitrary, subject to political manipulation, and unnecessary in the state’s competitive insurance market. They further contend that price regulation is redundant, since the state separately requires them to spend a certain percentage of premium revenue on medical care – and refund the difference if they fall short.

It’s also unclear that prior approval makes insurance more affordable in the long run. An analysis by the Empire Center showed that the affordability gap between New York’s insurance market and the national average actually got smaller when a previous prior approval law was phased out under Governor George Pataki.