The disruptions to K-12 education caused by the COVID-19 pandemic spurred Governor Cuomo to announce an initiative to “reimagine education.” This challenge should have policymakers asking what inadequacies have been exposed in our public education system, and which newly adopted practices should be permanent. Amidst a projected multi-year fiscal crisis, New York public schools should expect education spending cuts and should make plans to implement reforms without sacrificing quality.

The need for high-quality, innovative education to help spur economic growth and the need to rein in education spending may appear to be at odds. But that’s not the case. New York’s recent trends in education spending and student achievement on the National Assessment of Educational Progress (NAEP)—a countrywide assessment that compares learning outcomes across states—prove that more spending does not equal better results. 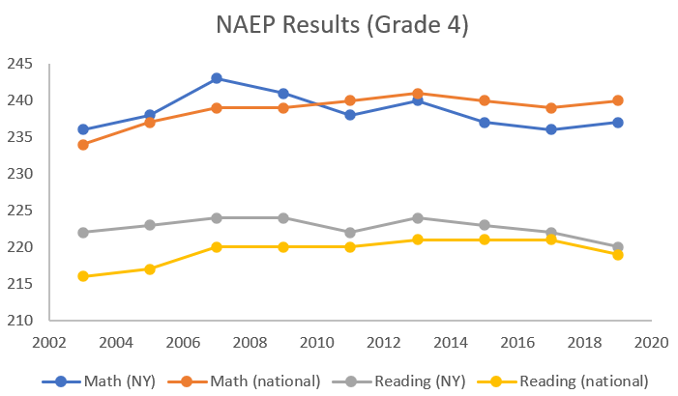 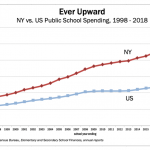 Bringing New York closer to national trends in these areas would represent an earnest start toward bolstering quality and lowering costs, as described in the reforms below.

Provide options to New York’s most vulnerable and underserved special education students: To better serve students with special needs, other states have established voucher programs for students with disabilities (SWDs). The vouchers earn high marks from participating families: An evaluation of the McKay Scholarship Program in Florida—which as of 2019 enrolled 28,935 participants across 1,516 schools—found that 93 percent of current McKay participants were satisfied or very satisfied with their McKay schools. Only 33 percent of program participants were similarly satisfied with the public school they previously attended.

A similar program would benefit SWDs in New York City, which has a particularly poor track record in special education. Notably, New York City families can already receive reimbursement for private school tuition if they can prove that the public school is failing to provide an “appropriate education.” But it appears that middle- and upper-class families disproportionately benefit from this de facto voucher program due to the costs and legal skills required to navigate the process. A means-tested voucher program would help level the playing field by guaranteeing that some of New York City’s most at-risk students have access to schools that can better meet their needs.

The fiscal impact of the proposed voucher program is primarily determined by two factors: The voucher allotment, and the share of participants who would have attended private schools in the absence of a voucher program. A voucher program would offer significant cost savings if it set the allotment equivalent to district average per-pupil expenditures and was made specifically available to families who could otherwise not afford private schools (e.g., families below the poverty line).

End one-size-fits-all special education funding: New York spends lavishly on education and has middling results to show for it. Perhaps nowhere is this truer than in providing special education. New York devotes almost $16 billion—more than a quarter of all its K-12 education spending—on special education instructional services (i.e., classroom expenditures for students with disabilities plus a prorated portion of building-level administrative and instructional support expenditures). That outlay exceeds the total K-12 spending of 39 states. Yet, in June 2020, decades of struggle culminated in the federal Department of Education concluding that New York “needs intervention” when it comes to fulfilling a federal guarantee that students with disabilities receive a “free” and “appropriate” education.

Allow virtual schools: Most families dislike their experience with virtual learning through the course of the COVID-19 pandemic. Nevertheless, some families have discovered that they prefer virtual learning. For example, a 13-year-old student chronicled in The New York Times how virtual learning relieved her of constant classroom interruptions and empowered her to learn at her own pace.

Even students that prefer in-person schooling could benefit from part-time virtual options, which may allow them to enroll in courses not offered in their public school or to enroll in courses that might not otherwise be available due to scheduling conflicts with another course.

The quality of virtual schools is as variable as it is for brick-and-mortar schools, but case studies reveal that virtual schools can perform as well as, and sometimes better than their brick and mortar competitors. School closures to in-person learning have provided parents with insight as to whether virtual schools are good options for their children. They should be able to explore those options.

The cost savings of virtual schools can be significant. The Florida Virtual School, the nation’s largest virtual school, had per-pupil costs 7 to 20 percent lower than those of public brick and mortar schools. A report concluded that the school is a “bargain” for Florida taxpayers.

Repeal LIFO: New York is one of ten states with a state law that requires teacher layoffs occur in the order of last in, first out (LIFO). That is, regardless of merit or performance, junior teachers are laid off first. And most teachers are paid on a stepped salary schedule. That means requiring districts to lay off their newest teachers first can result in a district laying off more teachers than would be necessary if districts could lay off lower-performing, higher-paid teachers.

Evidence suggests that LIFO harms student achievement. Most notably, one study concluded that laying off teachers according to seniority rather than merit hurts student achievement in math. The harmful impact to students captured public attention in Minnesota in 2017 when a former state teacher of the year lost his job due to LIFO. Minnesota’s LIFO statute was repealed later that year.

Historically, many districts adopted LIFO practices, even if it was not statutorily required. However, the tide has shifted in recent years. Between 2010-2016, the number of the nation’s 50 largest districts that exclusively use LIFO in layoff decisions dropped from 31 to 15, and districts which primarily use performance measures increased from 1 to 16.

If the state LIFO statute is repealed, districts could use teacher performance measures collected by the state. The Annual Professional Performance Review (APPR) ratings system makes determinations about teacher effectiveness and places teachers into one of four categories. Deference to this system would allow for fewer layoffs and establish that those which must occur reflect performance rather than seniority.

Stringent teacher licensure requirements also sometimes screen out highly credentialed teachers, or force them to clear unnecessary hurdles. For example, because New York practices limited reciprocity with licensure in other states, a math teacher who moved to New York from Pennsylvania was obligated to pay for math courses at a local college despite the fact that that she had taken higher level courses as part of her master’s program.

Relaxing or abolishing teacher preparation program requirements, or establishing new alternative preparation programs, would benefit students, especially at this moment. Studies indicate that teachers who enter the profession during economic downturns are more effective than those who enter during periods of healthy economic growth, as individuals worry about their prospects within the broader labor market. Easing teacher certification requirements would invite more competition for teaching jobs and encourage more highly skilled professionals to enter the teacher labor force.

Andrew Pallotta, president of the New York State United Teachers, the statewide teachers union, says that the state will need to hire 180,000 new teachers in the next decade and “the number of educators entering the field isn’t keeping pace.” Loosening certification requirements would be particularly helpful to address staffing challenges in math and science. Math and science teachers account for 10 and 9 percent of New York teachers, respectively, but only 3 percent of recent teacher preparation graduates specialized in math and another 3 percent in science.

New York has a strong stock of recent college graduates thanks to its many excellent universities. Policy reform should invite their energy, intellect, and enthusiasm into the public education system to help oversee the transition from reimagination to reform.