In another blow to transparency in Albany, a non-profit group closely tied to the state Health Department is refusing to publicly disclose its payroll records under the Freedom of Information Law.

Health Research Inc. (HRI) has functioned for decades as an off-budget adjunct to the state Health Department. The organization pays the salaries of more than 1,000 people who function as department staff, including high-ranking officials involved in responding to the coronavirus pandemic and combating HIV and AIDS.

Yet in response to an April 8 request from the Empire Center, a lawyer representing HRI asserted that it is a private organization rather than a state agency and thus not subject to FOIL.

That argument – which the Empire Center disputes – would leave the public in the dark about hundreds of millions of dollars in de facto state spending and roughly one-fifth of the Health Department’s workforce.

Empire Center tracked down salary information for most HRI employees through an alternate source: records of the state pension system, which are maintained by the comptroller’s office. That information has been posted publicly for the first time on the center’s transparency website, SeeThroughNY.net. The posted data are incomplete, however, in that they omit HRI staffers who have opted out of the state’s traditional defined-benefit pension plan.

“Health Research Inc. is operating in a gray area that undermines accountability – and there’s no obvious public benefit in the arrangement,” Hammond said. “Most of its operations can and should be turned over to the Health Department and made part of the regular state budget. At a minimum, New Yorkers are entitled to full access to its records under the Freedom of Information Law.”

HRI was originally founded in 1953 to accept grants and donations on behalf of the state-funded Roswell Park Comprehensive Cancer Center in Buffalo. The organization has since grown into an adjunct of the Health Department with at least 2,000 employees and more than $800 million in annual expenses.

Under a long-standing arrangement, HRI has supplemented the salaries of state health commissioners. The current commissioner, Dr. Howard Zucker, serves as president of HRI, and the organization provides him with pay and other compensation worth $75,000 a year on top of his state salary of $210,000.

People on the HRI payroll typically present themselves as Health Department employees and often work side-by-side with full-fledged civil servants. HRI employees are eligible to join the state pension system and most are represented by the Civil Service Employees Association, the largest union for state workers. HRI is also subject to occasional audits by the state comptroller’s office.

The organization does not hide its close relationship with state government, which is detailed in the “about” section of its website:

Health Research, Inc. (HRI) contributes to the health and well-being of the people of New York State by complementing and enabling the strategic public health goals of the New York State Department of Health (DOH), Roswell Park Cancer Institute Corporation (RPCIC), and other health-related entities.

HRI provides best-in-class resource administration for stakeholders and programs related to the work and priorities of the Department of Health and its other partners. HRI does this through the provision of knowledge, expertise, funding guidance, and fiduciary oversight of sponsored program funding for public health and research programs in concert with community partnerships

However, HRI’s budget is not subject to review or approval by the Legislature. Nor is its spending detailed in the state financial plan and other budget documents – which denies lawmakers and the public the full picture of state spending on public health.

A recent analysis by the Empire Center documented a significant drop in spending and personnel for the Health Department’s core public health functions, such as the Wadsworth Laboratories, over the decade leading into the coronavirus pandemic. But that analysis was based on the department’s publicly reported budget, and therefore omitted money and employees that may be hidden at HRI.

The organization’s murky status made news this spring after it was reported that a special adviser to Zucker, Dr. Eleanor Adams, had participated in providing expedited COVID-19 tests for friends and family of Governor Cuomo in the early weeks of the pandemic, when testing was scarce. In response to a query from the New York Post, the Health Department said it could not provide Adams’ salary because she was on the payroll of HRI, not the state.

It was shortly after that report that the Empire Center filed its FOIL request for HRI’s payroll, which the organization has so far denied.

To justify the denial, HRI’s lawyer cited to a 2001 ruling from the Public Employment Relations Board, which found that the organization is not a “public employer” as defined in labor law.

However, a 2001 opinion from the state Committee on Open Government found that HRI and similar quasi-governmental organizations closely linked to the state, such as the SUNY Research Foundation, fall under the definition of “agency” in the Freedom of Information Law. That definition covers “any state or municipal department, board, bureau, division, commission, committee, public authority, public corporation, council, office or other governmental entity performing a governmental or proprietary function for the state or any one or more municipalities thereof.”

Unlike HRI, the SUNY Foundation has acknowledged being subject to FOIL and provides contact information for records requests on its website.

Although HRI is resisting full transparency, it does comply with other reporting requirements that shed light on its operations.

HRI’s tax filings with the IRS show that the organization’s spending has more than doubled over the past two decades, from $331 million in 2002 to $820 million in the fiscal year that ended in March 2020 (see chart). Its revenue spiked to $1.3 billion in 2020, almost double the amount of the year before. A report from HRI’s auditors says the increase was triggered by a change in accounting standards related to “net assets with donor restrictions.” 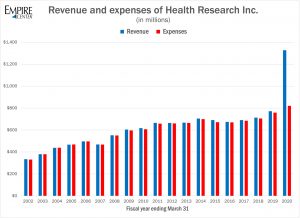 HRI also submits partial payroll records to the state retirement system, data routinely obtained by the Empire Center from the comptroller’s office and now posted at the center’s SeeThroughNY website. The calendar year 2020 data – which covers only members of the retirement system – includes salary information for 2,001 employees, 781 of which are affiliated with Roswell Park. Most of the remaining 1,220 appear to work for the Health Department, but their true titles or functions are not reflected in the pension records.

One person whose name appeared on that list was Dr. Adams, the official caught up in the Cuomo administration’s COVID testing saga, whose reported earnings in 2020 were just under $146,000. She is a Harvard-trained medical doctor and epidemiologist and former top aide to Commissioner Zucker, but her role at HRI is not apparent from the pension records, which lack specific title data. She has since left the department.

Also included on HRI’s payroll are many high-ranking officials of the department’s Office of Health Emergency Preparedness, which was involved in pandemic response, and its AIDS Institute, which provides support and services for people living with HIV and AIDS.

Section 2775 of the Public Health Law, which created the AIDS Institute in 1983, specified that it was “established within the department of health.” Yet of the 36 officials listed on the AIDS Institute’s organizational chart, 32 are on HRI’s payroll – including its medical director, Dr. Charles Gonzalez.

HRI also paid the 2020 salaries of at least 10 officials within the Office of Health Emergency Preparedness, including its director, Michael Primeau.

Further records provided by the comptroller’s office show the HRI holds 48 active contracts with other branches of state government – mostly with the Health Department, but also the Division of Criminal Justice Services, the Department of Economic Development, the Office for the Aging, SUNY, the New York State Energy Research and Development Authority, the
Governor’s Traffic Safety Committee and the Urban Development Corp.

Payments on those state contracts totaled $26 million over the past 12 months. The vast bulk of its revenue comes from the federal government.

Still missing from these records is a complete list of employees – including those who opt out of the state retirement system – along with their proper titles and job descriptions. Also unavailable is a detailed accounting of HRI’s non-payroll expenses, which amounted to three-quarters of its total spending in 2020.

“It’s clear from the limited records available that Health Research Inc. is functioning as an arm of state government,” Hammond said. “Its employees hold Health Department titles and do Health Department work – such as planning for emergencies and managing AIDS – yet they are technically employed by an organization that claims to be private and shielded from public scrutiny.

“That claim defies both the spirit and the letter of the Freedom of Information Law. HRI should release its records without further delay.”

Empire Center Previews State of the State: People are Leaving

Statement on the release of new COVID-19 Death Toll data