On issue after issue, lawmakers chose to preserve the status quo without addressing the many problems raised by the public health crisis of the past year, let alone the fiscal crisis that preceded it.

They made no serious effort to contain chronic budget overruns in New York’s bloated Medicaid health plan for the low-income and disabled—which had spawned multi-billion-dollar deficits before the coronavirus struck, and likely would still be doing so today if not for a temporary influx of federal emergency aid.

Nor did they attempt to strengthen the state’s public health system that was manifestly under-prepared for a viral outbreak that experts had seen coming for decades.

To the contrary, lawmakers gutted funding for the Health Department’s Wadsworth Center, a public health laboratory that played a central role in the pandemic response, including developing an alternative coronavirus test when the CDC’s test proved unusable. Wadsworth’s publicly reported budget was cut by one-third, from $93 million in the current fiscal year, to $61 million in fiscal 2022. Lawmakers reportedly set aside $750 million in capital funding to build a new facility for Wadsworth, but that would not affect its operating budget. 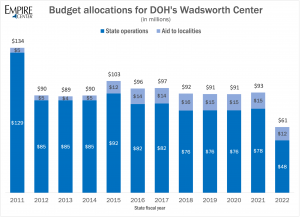 A press release from the governor’s office said the spending plan for fiscal 2022 “will continue to support the expansion” of COVID-19 testing at Wadsworth, but did not mention the cut to its overall budget allocation.

Perhaps the most significant health-related change in the new budget is a set of rules requiring nursing homes to spend at least 70 percent of their revenue on direct care, including at least 40 percent on “resident-facing” staff, along with a 5 percent cap on profit.

These rules will primarily affect for-profit facilities, many of which will have to boost spending on staff. Whether care will get better as a result is another question. Experience shows in Albany that simply directing more money to something doesn’t necessarily improve its quality.

As a response to the pandemic, the focus on staffing may be misplaced. An Empire Center analysis of recently released Health Department data found no clear correlation between staffing levels and coronavirus mortality.

With respect to Medicaid—the government-run health plan for the low-income and disabled that covers one out of three New Yorkers—nearly all departures from the status quo were dropped from the final plan, whether they originated with the governor, the Assembly or the Senate.

Cost-cutting measures proposed by the governor—such as reducing provider fees 1 percent across the board, cutting a subsidy for physician malpractice insurance, and pushing a share of indigent-care and public health costs onto the New York City budget—were rejected by the Legislature.

A dubious plan to “carve out” the drug benefit from Medicaid managed care and have the Health Department directly reimburse pharmacies—which the governor pushed through last year, but which had yet to take effect—was postponed until 2023.

By the same token, proposals from the Assembly and Senate that would have further driven up Medicaid spending—such as abolishing an inflation-based “global cap” on the program, and boosting the minimum wage for home-care workers—also were left out of the final package.

Another bullet dodged was a proposed amendment to insurance law known as “pay and pursue,” which would curtail the ability of health plans to question claims filed by hospitals before paying them. Cuomo joined with the Greater New York Hospital Association to push this as a last-minute addition to the budget, while insurers, employers and labor unions pushed back. In the end, it was not part of what lawmakers approved.

Heading into last year’s budget—which coincided with the onset of the pandemic—the state’s Medicaid program was running a $4 billion deficit, which Cuomo proposed to close with a combination of cash on hand, fiscal maneuvering and spending cuts. The Legislature approved about $2 billion in cost-saving measures recommended by the governor’s Medicaid Redesign Team, but many of those steps had to be postponed as a condition of accepting federal pandemic relief.

Under Cuomo’s original budget, total Medicaid spending was projected to soar by 9 percent, or $7.6 billion, in the year ahead. With the rejection of Cuomo’s cost-cutting proposals, that increase can be expected to grow.

For now, the state will be financing that increase with the extra Medicaid money from Washington, which is worth $6.5 billion or more over two fiscal years plus another $1.6 billion earmarked for home care.

But that temporary source of money is due to go away shortly after President Biden declares the pandemic emergency to be over—which will leave a larger hole than ever in the Medicaid budget. This year’s budget merely postponed the Medicaid reckoning, and guaranteed that it will be more painful when it arrives.