As Medicaid costs spiraled over the past decade, other parts of the state Health Department were losing money and staff—leaving New York with diminished public health resources when the pandemic struck last year.

Take the example of the Wadsworth Center, one of the nation’s premier public health labs. Its team of scientists have played a major role in combating the coronavirus, including quickly devising a new diagnostic test last February after the CDC’s test kits didn’t work.

Over those same 10 years, the Center for Community Health, whose portfolio includes monitoring infectious diseases, saw its publicly reported budget increase just 5 percent, about one-third of the inflation rate, and its state-funded staffing drop 19 percent, from 617 to 499 full-time equivalents.

Similarly, the Office for Primary Care and Health Systems Management, whose functions include inspecting nursing homes, sustained a 35 percent reduction in its publicly reported budget and 43 percent loss of state-supported staff since 2011. 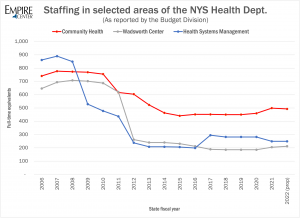 These numbers do not necessarily show the full picture. A significant share of the Health Department’s funding is hidden within Health Research Inc., a quasi-governmental entity that shares limited information with the public.

HRI’s tax forms show $1.3 billion in expenditures during fiscal 2020, but that spending is not included in state budget documents. It also employs an unknown number of people who function as state personnel and work side-by-side with regular state employees at Wadsworth and other parts of the Health Department.

HRI’s role notwithstanding, there is little doubt that New York allowed its public health infrastructure to shrink, both in terms of funding and personnel, in the years leading up to the worst public health crisis in at least a century.

At Wadsworth, the pattern is due to continue. Under Governor Cuomo’s proposed budget for the Health Department, Wadsworth would lose another 38 percent of its state operating budget, which would drop from $78 million in fiscal 2021 to $48 million in 2022. The proposal allocates a 5 percent increase for the Center for Community Health and a 1 percent increase for the Office of Primary Care and Health Systems Management.

In one of his recent briefings, Governor Cuomo alluded to decline in support for public health, but framed it as a national failing: “We talked for a lot of years about public health. There are great institutions dedicated to public health… But what we neglected to do as a nation was invest the money we needed to invest in actually having an operational public health system.”

However, the downward trend in New York’s public health spending came in spite of increasing support from Washington. Federal support for the Health Department’s overall non-Medicaid budget has jumped 120 percent since 2011, from $1.7 billion to $3.8 billion, even as the state’s contribution dropped 33 percent, from $2.5 billion to $1.7 billion (see chart). Most of that additional money went to medical programs, such as Child Health Plus and Elderly Pharmaceutical Insurance Coverage (EPIC), as opposed to public health functions such as pandemic readiness and nursing home oversight. 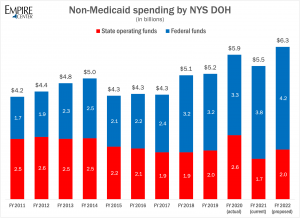 The negative trend for public health stands in sharp contrast to the rising tide for Medicaid. The state share of Medicaid has risen by $6.9 billion or 39 percent since 2011. The program’s total budget, including federal aid and local funding, is up by $26 billion or 48 percent. The governor’s 2022 budget calls for its overall spending to increase by $3.7 billion, or 4.7 percent, to a new high of $83 billion.

Medicaid money primarily flows to hospitals, nursing homes, clinics and other providers of medical care for individuals—who played the crucial and even heroic role of caring for the millions of COVID-19 patients, in many cases saving their lives.

In countries that responded most successfully to the pandemic, however, it was not hospitals and nursing homes that made the primary difference. What saved the greatest number of lives in those places was the effective use of public health tools such as advance planning, disease surveillance, testing, contact tracing and quarantining, as well as clear communication with the public and the proper and timely use of precautions such as masks, social distancing and business restrictions.

Tomorrow, the Legislature’s joint finance committees are holding a public hearing on the health-care portion of the governor’s budget proposal. Medicaid is typically the dominant topic of these annual events—and lawmakers are also expected to grill the health commissioner, Dr. Howard Zucker, about his handling of the coronavirus in nursing homes.

Given the catastrophic events of past year, legislators should also spare a few questions about the condition of the public health infrastructure:

How did funding reductions over the past decade affect the Health Department’s ability to respond to a major pandemic?

What is the full amount of money and staff allocated to public health, including at HRI?

Most importantly, what additional resources does the department need to be better prepared when the next virus arrives?