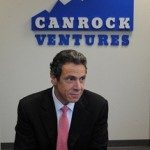 New York’s ongoing experiment in state-run venture capital investment appears—not for the first time—to have been ripped off.

During Governor Andrew Cuomo’s first term, seven VC outfits were given a total of $45 million in federal and private funds to invest in startups. One firm, Long Island-based Canrock Ventures, steered nearly all of the $1.67 million it received into companies it controlled and routed money back to its own coffers through fees and other gimmicks.

The Cuomo administration ignored concerns from a whistleblower investor, but a U.S. Treasury Department Inspector General investigation revealed $1.63 million in “gross misuse” of federal funds. In a report issued just before President Barack Obama left office, the IG recommended that the Department order New York State to repay the money. It’s not clear, however, whether the Department issued such an order—or, if it did, whether ESD ever recovered the money from Canrock.

Tokenize’s CEO, Melanie Shapiro, is accused of using the company as a “personal piggy bank,” the Daily News reports. From the newspaper:

Digging further into details not mentioned in the newspaper story, the Tokenize investment was approved directly by Empire State Development, the state’s economic development agency, with minimal discussion at a December 2017 board meeting.

It’s also unclear what need the Cuomo administration is trying to fill in the VC space. New York venture capital firms reported at least $2 billion in fundraising each year since 2013, and took in $9.4 billion during 2018 alone.

The Cuomo administration is still trying, and failing, to prove him wrong.