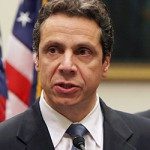 Starting his second year in office, Cuomo has stuck to a self-imposed cap of 2 percent on annual growth in the state operating funds budget (excluding federal grants and capital spending).  The result has been consistently lower levels of spending growth, as shown below. 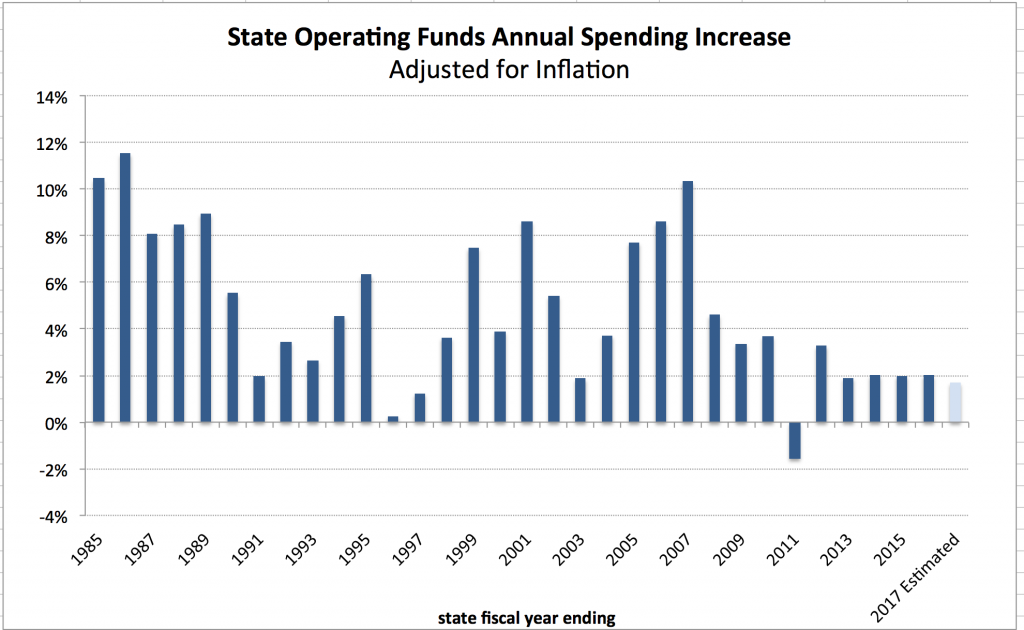 Cuomo’s proposed 2017 budget would boost spending by 1.7 percent. To be sure, the governor cuts corners to get to that figure; at the margins, his Executive Budget stayed below 2 percent not by holding down spending but by offloading it, most notably through a shift of about $500 million in (state fiscal year) costs for Medicaid and City University (CUNY) senior colleges. On the other hand, the governor’s budget includes a K-12 school aid increase with a state fiscal year impact of $700 million, or 3 percent; on a school-year basis, the increase comes to $1 billion, or 4 percent.

The Assembly’s Democratic majority, however, wants to boost the state operating funds portion of the budget by another $1.9 billion—a 3.7 percent increase, according to its summary memorandum. The Assembly’s additional spending consists mainly of higher school aid (a whopping 9 percent increase on a school year basis) and a reversal of the proposed CUNY and Medicaid shifts for New York City.

Unlike the Assembly, Senate Republicans did not issue a memorandum summarizing the net fiscal impacts of their budget resolution. The Senate’s official press release asserts that the upper chamber’s one-house plan “stays within the self-imposed two-percent spending cap”—but that’s hard to immediately confirm, based on the summary in the Senate’s one-house budget resolution. The Senate proposals include a school aid increase totaling at least $700 million on a fiscal year basis—enough, all by itself, to boost spending closer to 3 percent. (The resolution uses multiple figures, some possibly duplicative, without explaining whether they represent state fiscal year or school year totals.)

Just two months ago, the same Senate Majority was approving a plan to codify Cuomo’s state spending cap—and then some—by holding state operating spending below the three-year average inflation rate, which would come to 1.27 percent in fiscal 2017.  Nonetheless, if the Senate’s one-house plan somehow comes in under 2 percent growth, it almost certainly does not come in as low as 1.27 percent.  (Memo to Senate: if you’re going to make such a big deal of proposing a spending cap, you should at least show how you would actually abide by it, if only for illustrative purposes.)

In another move that will push total spending above the cap, both houses refused to go along with Cuomo proposal for workers’ compensation reforms that would also have required the State Insurance Fund (SIF) to reduce the state government’s workers’ compensation premium by $375 million over the next three years, including $140 million next year.

Both houses also rejected the governor’s proposal to shift the Canal Corp. to the Power Authority, which was Cuomo’s pretext for eliminating a $85 million operating subsidy of the Thruway Authority. The Senate restored the full subsidy.

As it happens, the Legislature was right to reject these proposals—but they should have acknowledged and offset the total added cost of $225 million in their budget resolution summaries.

In a move that affects capital rather than operating expenses, both houses also rejected Cuomo’s proposal to  spend $113 million a year over the next three years on income tax credits to reimburse New York drivers for half of their toll expenses exceeding $50 a year.  The Assembly retained $15 million in toll credits for farmers only, while the Senate rejected the entire idea. Since the money to fund the credit would have come from bank settlement windfall revenues, the Legislature presumably want to reprogram the money for infrastructure purposes—although that, too, was not clear from the one-house memos.