Goldman Sachs surprised hardly anyone when it announced that its top seven execs would take no bonuses this year. UBS followed suit a day later. But top executives aren’t the real bonus worry.

Now that Goldman has set the bar on the investment-bank side, it will be hard for the other top tier Wall Street firms as well as for UBS’s peers in the universal-banking world not to do the same. (On the topic, Citi chairman Win Bischoff told observers yesterday to stand by for an announcement soon.) The news about chief executives and other top officers foregoing bonuses is a hit to New York’s coffers, of course.

But the several million dollars Goldman’s top guys likely would have given New York City this year isn’t the biggest hit the city could take. Consider: Goldman paid these seven people about $300 million last year, just a tiny fraction — about 1.5 percent — of its $20.2 billion-plus in 2007 compensation payout (most of which was in the form of bonuses).

The lion’s share of bonuses on Wall Street, at Goldman and other firms, has usually gone not to executives but to top-producing traders and bankers, whose compensation, in many cases, exceeds that of the guy in the corner office.

The real budget bomb for New York City (and state) is if Goldman and its peer firms follow suit with no bonuses, or tiny bonuses, for their wider ranks of bankers and traders.

Could they do so? It’s conceivable. The firms have got to be thinking of how it will look in the press when the news inevitably leaks out that some guy made $50 million or $100 million, or even $10 million or $5 million, betting that, say, Lehman would go bankrupt, precipitating, in many people’s eyes, the $700 billion government bailout.

Negligible bonuses would add, in a big way, to New York’s budget predicament. As the following chart shows*, bonuses have made up a significant share of the city’s personal income in recent years, and that share, in the past three years, has exceeded the previous tech-bubble peak. 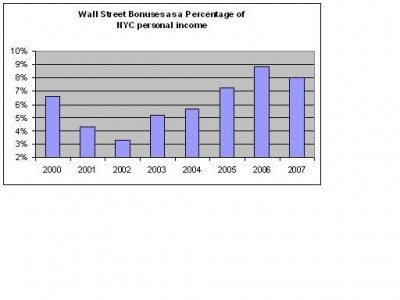