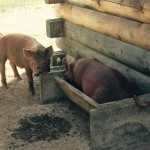 The Capital Projects appropriations budget bill adds $385 million to the State and Municipal Facilities Program (SMFP), which uses money borrowed through the Dormitory Authority to fund pet projects. The additional money was not included in the governor’s Executive Budget.

So, who insisted on adding to the fund—and why? As usual, there’s no answer, and no justification offered for one of many deals reached behind closed doors by Cuomo and legislative leaders.

The SMFP was created in 2013 with a $385 million appropriation to support generic capital expenses of local governments and school districts. It has been expanded in every annual budget since then—appearing only in the final product. Along the way, the description of eligible purposes has been expanded to include “economic development” projects, provided that they “create or retain jobs.”  But there are no clear criteria for project selection, which appears to be shaped largely by political considerations.

Cuomo’s capital projects financing plan indicates that only $125 million has been spent out of SMFP to date. Among other things, those funds have been earmarked for an outlet mall on Staten Island, a hotel renovation in Syracuse, and overdue payments for the SolarCity factory construction in Buffalo.

Last summer, the Empire Center obtained a list of projects that had sought or received SMFP funding. That list can be searched in the pork database on SeeThroughNY.net.