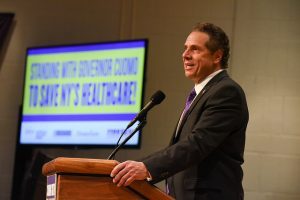 Governor Cuomo’s speech at a rally in defense of the Affordable Care Act included several questionable facts, exaggerations, or omissions.

Assertion No. 1: “It is not reality that we are going to repeal the Affordable Care Act and have the 3 million New Yorkers who are now insured lose their insurance. That is one out of every six New Yorkers has been given insurance under President Obama’s Affordable Healthcare Act [sic], and we’re not going back.”

This seems to be a reference to the 3.6 million New Yorkers who signed up for coverage in 2017 through the state’s Obamacare exchange, the New York State of Health. But many if not most of those people used the exchange to re-enroll in Medicaid coverage that they already had before the ACA.

A more reasonable estimate of the net impact comes from the Centers for Disease Control, which found that New York’s uninsured rate dropped by almost 5 points, from 9.9 percent to 5.5 percent, after Obamacare took full effect in 2014. That translates to almost 1 million people gaining coverage – a big number, but well short of 3 million or “one out of every six New Yorkers.”

Cuomo might also be referring to his own administration’s projection that as many as 2.7 million New Yorkers could lose coverage if the ACA were repealed. However, that scenario assumes Washington would not only roll back the Medicaid expansion of 2014, but also block New York from restoring broad eligibility rules it used for many years prior to the ACA.

Assertion No. 2: “There are 129 million with pre-existing illnesses that now have health insurance that would lose their health insurance if they have their way, and we’re not going to let that happen.”

Cuomo appears to be referring to a years-old analysis from the U.S. Department of Health and Human Services, which estimated that 19 percent to 50 percent of the non-elderly population, or 50 million to 129 million people, have some kind of pre-existing health condition. However, the vast majority of those people have employer-provided insurance or qualify for Medicaid – and therefore are not at immediate risk of being denied coverage if the ACA were repealed.

Assertion No. 3: “In truth, the other side never wanted universal healthcare,” Cuomo said, crediting Democratic presidents Truman, Johnson, and Clinton for proposing national health plans before President Obama did.

He neglected to mention that in 1974, six months before resigning, President Nixon proposed a universal health plan, which was later supported by President Ford.