The Wall Street bonus pool for 2012 expanded by 8 percent, but remains well below the peak levels of a few years ago, according to a release today by state Comptroller Thomas DiNapoli.

Wall Street bonuses and the state’s personal income tax receipts are tightly correlated, as shown below. 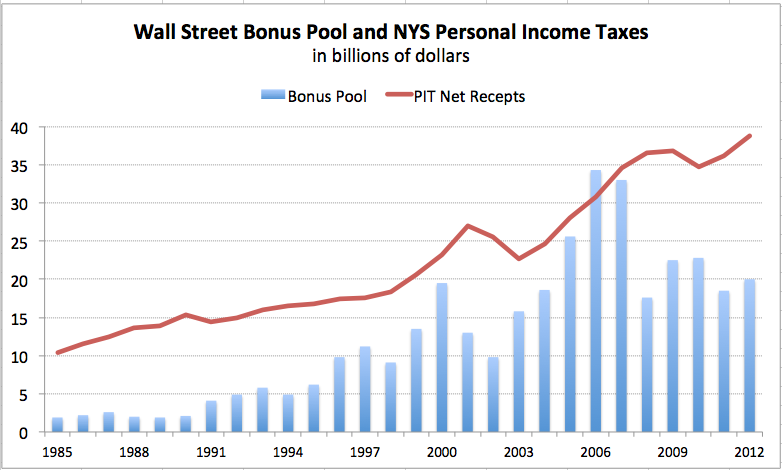 In contrast to bonuses, income tax receipts are above the 2006 bonus pool peak in part because of the temporary “millionaire tax” hike, first enacted in 2009 and extended at the end of 2011.  In the wake of the financial crisis, investment banks have begun deferring portion of bonuses into the future, which will smooth out some of the volatility in this income, DiNapoli’s release says.

However, the comptroller also notes that “the securities industry in New York City lost 28,300 jobs during the financial crisis and has added only 8,500 so far during the recovery, a net loss of 19,800 jobs.” The Wall Street goose is still laying those eggs, but fewer of them. The question remains: can New York State and City permanently adjust to an era without extraordinary financial compensation booms?

Our goose is cooked

Profits down but bonuses up on Wall Street

Dow down = state revenues up?

Profits down but bonuses up on Wall Street

No Wall Street bailout (of New York) this year

The Fed’s escape from NY (someday)