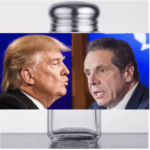 Governor Andrew Cuomo has announced he’s flying to Washington on Tuesday to meet with President Donald Trump about the impact on New York of the state and local tax (SALT) deduction cap in the new federal tax law.

Last week, Trump said in an interview that he’s “open to talking about” the SALT cap, and reportedly added: “There are some people from New York who have been speaking to me about doing something about that, about changing things.”

It boils down to basic math. The Tax Foundation estimates the limit on SALT deductions will raise at least $600 billion in revenues over the 10-year period to help offset the costs of the tax cuts for individuals and corporations under the new federal tax law, formally entitled the Tax Cuts and Jobs Act, or TCJA. Without the money saved from capping SALT, the budgeted 10-year cost of TCJA to the federal treasury would swell from $1.5 trillion to more than $2.1 trillion, according to the original Joint Tax Committee score of the bill. That would generate more red ink than even the most rabid supply-side, deficit-tolerant congressional Republicans could swallow.

Since restoring the cap would benefit mostly high-income taxpayers—even while benefitting the treasuries of deep blue Democratic states with soak-the-rich tax policies—congressional Democrats alike would never consider such a change unless it was combined with a sharp increase in taxes on high earners, corporations, or both. That would be a non-starter in the Republican-controlled Senate, not to mention the White House.

While Democrats in Congress have joined some Republicans (such as New York’s Rep. Peter King) in vowing to repeal the cap, there’s scant evidence leaders in either party really care all that much. Soon after the TCJA took effect last year, New York’s own senior senator, Charles Schumer, signed on to a $1 trillion Senate Minority infrastructure plan that would be financed largely by a rollback of TCJA provisions disproportionately benefitting affluent New Yorkers—without restoring full SALT deductions.

Cuomo has repeatedly charged that the SALT cap was politically motivated, aimed primarily at heavily Democratic “blue” states to help finance tax benefits for residents of Republican “red” states.  He’s right, and it was hardly a secret; congressional Republicans didn’t deny it, and conservative supporters of the tax cut hailed it as overdue comeuppance for high-tax liberals.

But Cuomo also has repeatedly mixed his messages, implying the TCJA is primarily a tax cut for the rich, including corporate tax cuts, and that the SALT cap is raising federal taxes for New Yorkers. All of which is a gross distortion, to say the least.

The $600 billion in revenue raised by the SALT cap can more appropriately be paired with the $700 billion revenue loss associated with the TCJA provision doubling the standard deduction for individual income tax filers. The bigger standard deduction delivers big savings to low- and middle-income taxpayers, including many who previously itemized SALT deductions in New York and other high-tax states.

As for the impact on individual taxpayers, the vast majority of New Yorkers will save money despite the SALT deduction limit. The Tax Policy Center estimated 8.3 percent of New Yorkers will pay more, compared to 6.3 percent nationally. Most of the losers are concentrated within the top 1 percent of the income pyramid—especially in New York City, where the combined top-bracket rates rate will now be higher. (See our statewide map of estimated impacts, and other links, here.)

Cuomo’s visit to Trump follows up on his announcement last week that state personal income tax estimated payments in December and January fell $2.3 billion below projections, creating fiscal stress he described as “serious as a heart attack.” He has implied, without saying so, that the revenue shortfall reflects decisions by high earners to leave New York in response to the loss of the SALT cap. From his remarks today:

After all, at least some portion of the revenue shortfall was probably due to the stock market’s epic fourth quarter reversal last year, which would have depressed if not reduced capital gains income. (Cuomo’s initial FY 2020 Executive Budget revenue estimate, prepared in early January, assumed capital gains income actually increased slightly in 2018.)

To whatever extent the revenue drop can be linked to the TCJA and its SALT cap—and the new federal law could, indeed, be the major factor—it dramatically highlights the sensitivity of high earners to big changes in effective tax rates.  Clearly many New Yorkers with control over the timing of their bonuses, profits and capital gains accelerated as much as they could into 2017, right before the new tax law took effect, in order to maximize the value of their last year of uncapped SALT deductions. This would have reduced their 2018 incomes, explaining a bigger drop than Cuomo’s budget staff expected. But going forward, the only way the same earners can permanently escape an effectively high tax burden is by moving somewhere else.

As Cuomo stressed last week, New York is highly dependent on the highest-earning 1 percent of its residents, who generate roughly 46 percent of the income tax liability for all resident taxpayers.

But even as the governor pounds away at the SALT cap, his budget proposals would perpetuate the problem—and even make it worse.

He is, after all, also calling for a five-year extension of the supposedly temporary, so-called “millionaire tax,” which he previously extended for no more than two or three years at a time. At 8.82 percent, compared to the permanent-law top rate of 6.85 percent, it was near its 30-year high when the SALT cap took effect.

Cuomo also has renewed (in Part Y of the Article 7 Revenue Bill) his support for a proposal that wold have New York join four neighboring states in sharply raising taxes on “carried interest,” a form of investment income that makes up a big chunk of the earnings of private equity and hedge fund managers. Federal tax law gives carried interest preferential treatment at the capital gains rate—which critics have branded a “loophole.”  Trump himself said during his 2016 campaign that he favored closing the loophole, but the tax bill only closes part of it, by requiring a minimum three-year holding period for investment gains to receive preferential tax treatment. This is not an issue on the state level in New York, which taxes all income at the same rate.

So, while sounding the alarm over the potential loss of rich residents, Cuomo is (at least in concept) supporting a 200 percent tax increase aimed at the some of the state’s highest earners—fund managers who easily generate hundreds of millions if not billions of dollars a year to the state treasury.

The carried interest proposal has been the political hobby-horse of teacher unions unhappy with the support provided to charter schools by some prominent hedge fund managers. While pandering to carried-interest opponents, Cuomo may have been assuming that the targeted taxpayers will cut him slack and view the proposal as little more than political theater, since New York and four neighboring states are highly unlikely to coordinate on a huge tax increase.

But in today’s political atmosphere, targeted fund managers are more unlikely to feel uneasy about this. Surely they realize there is no shortage of lightly taxed states and cities (one of which just attracted the headquarters of a storied New York investment firm) that would welcome new millionaire earners with open arms.