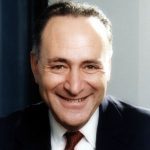 To cover the 10-year, $1 trillion price tag of their package, Senate Democrats would reverse several provisions of the newly enacted federal Tax Cuts and Jobs Act—including reductions in the top income tax rate and in the Alternative Minimum Tax (AMT).

Like Governor Cuomo, Schumer—who became Senate minority leader a year ago—has loudly and repeatedly denounced the new federal tax law’s cap on state and local tax (SALT) deductions. “We despise the SALT cap,” he declared at a Long Island news conference last month. “We’re pushing to reverse it in every legislative way that we can.”

But in reopening the tax code, the Schumer-backed infrastructure plan doesn’t touch (or even mention) the lost SALT breaks. Instead, the proposal would pluck even more money out of New York’s tax base with one hand, while doling some of it back to New York with the other.

The new federal tax law includes a decrease, from 39.6 percent to 37 percent, in the marginal rate on taxable incomes starting at $500,000 for single filers and $600,000 for married couples. It also sharply reduces or even eliminates AMT payments for many of those previously subject to that added tax—which included, as of 2015, more than 80 percent of New York households with incomes between $200,000 and $500,000.

The Schumer-backed infrastructure plan would reverse both of these changes, restoring the top rate of 39.6 percent (raising an estimated $139 billion over 10 years) and re-establishing the prior AMT parameters (raising $429 billion).

“Returning the Republican Tax Giveaways for the Wealthy to the American People,” is the subtitle of the plan document released yesterday. But those “giveaways” are largely funded by takeaways from high earners in New York and a handful of other high-tax states most negatively affected by the SALT cap.

In fact, the biggest losers from the tax hikes in the Senate Democrats’ infrastructure plan would include the same high-income New Yorkers who have, by far, the most to lose from the SALT cap. This is not good news for a state government that already depends on the top 1 percent to generate more than 40 percent of its income taxes.

With 6.4 percent of the nation’s total income tax filers in 2015, New York was home to more than 11 percent of the nation’s millionaire earners, who generated nearly 14 percent of all federal tax liability for that group, according to Internal Revenue Service data. Even with the federal rate cut, the SALT cap will result in a higher combined federal, state and local income tax rate for the highest-earning residents of New York City. Those living outside the city will receive, at most, minimal cuts. And repealing the AMT changes will transform a federal tax cut into a tax increase for many New Yorkers with incomes between $200,000 and $500,000.

In addition to these changes, the Senate Democrats would pay for their infrastructure plan by reversing cuts in the federal estate tax, and by raising the corporate tax rate to 25 percent from its newly reduced level of 21 percent. It also would close the so-called “carried interest loophole,” under which investment managers (mainly partners in private equity funds) can pay a lower long-term capital gains rate on earnings from investments held for at least three years. (Here’s a good explanation of how the tax provision actually works, and why “loophole” is a misnomer.)

New York itself taxes capital gains at the same rate as salaries and bonuses. However, under current federal law, commuters from Connecticut and New Jersey pay taxes on carried interest to their home states. Absent any other change, if carried interest is treated as “earned” income, like salaries and bonuses, it would benefit New York’s state treasury—but only at the expense of neighboring states. The four Democratic senators from New Jersey and Connecticut couldn’t actually let that happen, though. Ironically enough, Schumer used to be a defender of the the carried-interest provision, playing a crucial role in past attempts to block its repeal.

So, how much of the $1 trillion would go to New York? It’s impossible to say. Schumer clearly wants to ensure generous federal backing of New York’s crucial Gateway tunnel project, for example, and the plan has several categories through which money would flow to transit projects (which would tend to favor New York City, in particular) as well as highways—not to mention ports, airports, sewer and water systems, the energy grid and just about anything else a Washington log-roller could think of.

In the past, before he attained a top leadership position, Schumer was skilled at steering gobs of federal money to New York—as in the temporary 2009 stimulus bill stimulus bill, which carved out an extra preference tailored to New York’s Medicaid program. But even in an imaginary universe where the Senate Democrats’ proposal actually had a chance of becoming law, a broad federal infrastructure bill packing a big net benefit for New York would be a first.

The cap on SALT, like most of the other individual income tax changes enacted in December, is due to expire in 2025. Schumer’s willingness to promote a spending plan reliant on higher taxes from high-income households—even at the risk of further undermining New York’s own tax base—illustrates why future efforts to revive unlimited SALT deductions will probably be doomed.

Most senators and representatives in both parties come from states with lower average incomes, not to mention lower SALT burdens, than New York. If Schumer wants to promote spending bills as a congressional leader, he needs to go where the money is—even if its his own backyard. So much for “repeal and replace.”

There is a third way, articulated nearly 20 years ago by the late former U.S. Senator Daniel P. Moynihan:”Less activism in Washington in return for more revenue at home, for whatever active measures recommend themselves to the state or municipality in question.”

Unfortunately, despite their professed devotion to federalism and fiscal responsibility, congressional Republicans are unwilling to let states (especially blue states) keep more of their revenue at home. Democrats like Schumer are equally unwilling to settle for less activism in Washington, even when it means handing a bigger bill to their own constituents. New Yorkers are the biggest losers either way.