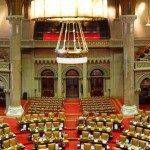 Squirreled away in the new state budget is a provision—first proposed by Governor Andrew Cuomo—that will guarantee future periodic pay raises for the governor, New York State legislators and other state government officials.

One of the budget bills creates a commission that will convene this June—and every four years thereafter—to “evaluate and make recommendations with respect to adequate levels of compensation and non-salary benefits” for members of the Assembly and Senate; the governor, state comptroller and attorney general; state judges; and top state commissioners and department heads.

The raises automatically take effect following the next election, possibly as early as January 2017, unless the Legislature votes to overrule the commission.

As of mid-afternoon today (April 10), the bill had not yet been signed by Governor Cuomo. The full language (Part E of A6721a/S4610a) can be viewed here.

A somewhat broader version of the commission proposal first surfaced in Governor Cuomo’s Executive Budget. The entire concept was reportedly rejected by Senate Republican Leader Dean Skelos during the final week of budget negotiations, only to reappear as part of the final package. The final version did not include, among other things, Cuomo’s original recommendation to have the commission recommend a two-tiered pay schedule for state officials, based on whether they earn outside income.

Neither legislative leader mentioned this in their respective statements, nor was it included in Governor Cuomo’s 18-page press release touting passage of the budget.

As the Daily News pointed out in an editorial, the pay commission will be able to deliberate for more than 500 days and then conveniently return its recommendations after the next election.

Kicking the decision over to a commission looks to have a healthy track record of delivering: a 2014 study by the National Conference of State Legislatures (NCSL) found that every state legislature that saw a pay raise during the preceding 12 months had done so without a vote; the states that saw the largest hikes, Hawaii and California, each did it by passing the task to a commission.

Members of Congress created a similar arrangement for themselves more than a quarter-century ago. A 1989 law provides for automatic annual cost of living adjustments (COLA) in congressional pay unless they are voted down by a majority in each house, which has happened several times in recent years.

It’s unclear, however, whether the New York Legislature’s mechanism would actually pass muster under Article III, Section 6 of the state Constitution, which reads, “Each member of the legislature shall receive for his or her services a like annual salary, to be fixed by law.” [emphasis added]. A framework for automatic but variable quadrennial pay hikes doesn’t sound “fixed.”

In addition to the usual steep odds facing anyone who attempts to overturn a legislative action on constitutional grounds, a legal challenge to the creation of the pay commission would face an added obstacle. To prevail, a litigant would have to persuade state judges to  overturn the sort of gimmicky circumvention that produced their own latest pay raise. (The new commission would supersede and do away with a commission created in 2010 to recommend judicial salaries only.)

The budget bill creating the commission also contained a variety of provisions dealing with unrelated subjects related to infrastructure, START-UP NY and other areas. It passed the Assembly 99-47 and the Senate 58-4.

However, in both houses, a “no” vote didn’t automatically signal opposition to automatic pay raises.  At least 3 senators and 3 assembly members already had signed on to separate legislation that would have created a similar commission with the power to enact raises without legislative action.