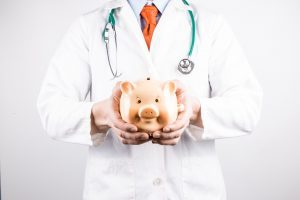 Facing a multibillion-dollar gap in state finances, Governor Cuomo has turned to one of Albany’s favorite piggy banks: the health care industry.

Out of $1 billion in “revenue actions” proposed by Cuomo on Tuesday, $750 million would be extracted from health insurers and drug manufacturers and earmarked for various health-related spending programs.

In effect, the state would be taxing health care to pay for health care—in keeping with a long-standing habit that helps give New York some of the nation’s highest health premiums.

Topping Cuomo’s list would be proceeds to be reaped from the conversion of health insurers from non-profit to for-profit status, which he projects at $750 million per year for the next several years. Although it’s a short-term source of revenue, Cuomo proposes to use it for ongoing expenses. He would earmark $500 million a year for Medicaid and $250 million for a “health care shortfall account” to hedge against future cuts to federal health care funding.

The biggest conversion to be made public so far is the pending purchase of non-profit Fidelis Care by for-profit Centene, with a sale price of $3.75 billion.

The state’s Catholic bishops, who control Fidelis, had planned to plow those proceeds into a charitable foundation that would, in the words of Timothy Cardinal Dolan, “continue Fidelis’ founding mission of providing for the health- and health care-related needs of those most in need throughout New York State.” Under the governor’s proposal, however, the church would have to forfeit some large share of the money to the state treasury.

Such payments to the state are already required for non-profit insurers organized under Article 43 of the Insurance Law. However, Fidelis is an HMO under Article 44 of the Public Health Law. To make his plan happen, Cuomo needs new statutory language—which for some reason was not included in budget-related legislation unveiled on Tuesday.

Cuomo is also proposing a 14 percent tax on the underwriting gains of for-profit health insurance companies, which would bring in an estimated $140 million a year.

He characterized the tax as a “windfall profit fee,” since those companies are expected to reap substantial savings from the recently passed federal tax cuts. However, the fee does not apply to all corporations that are in line for a tax cut, or even all insurance companies, but only health insurers.

Cuomo’s third health-related tax is an “opioid epidemic surcharge” on opioid-based pain medications. The revenue would flow into a newly created fund for support of “ongoing prevention, treatment, and recovery services.”

It appears that the new money will mostly replace rather than add to what the state already spends on such services. The tax is expected to bring in $127 million in the first year, but the state’s overall spending on alcohol and drug treatment would increase by just $18 million.

Mostly, the new money will go toward financing Medicaid, the state’s massive health plan for the poor and disabled. Among the bills to be paid is the cost to hospitals and other Medicaid providers of complying with Cuomo’s increase in the state minimum wage – the impact of which keeps getting bigger.

By fiscal year 2020, the annual impact will approach $1.2 billion, enough to buy Medicaid coverage for some 400,000 children.

Albany has a long practice of taxing health insurance to pay for healthcare – which is how various surcharges and fees levied under the state’s Health Care Reform Act have grown to become the state’s third largest source of revenue, after income and sales taxes.

A parallel to this year’s proposals unfolded in 2002, when the state faced a budget crisis after 9/11 and its largest insurer, Empire Blue Cross Blue Shield, was preparing to become a for-profit company.

Then-Governor George Pataki claimed most of the Empire conversion proceeds for state coffers, hiked taxes on health insurance, and used the money not just to balance the budget, but to increase pay and benefits for hospital and home-care workers. The leader of the healthcare workers union 1199, Dennis Rivera, endorsed Pataki for reelection in the aftermath.

The counterproductive side effect, then as now, was to drive up the cost of private insurance, making it that much harder to afford, and ultimately increasing demand for government-sponsored coverage.