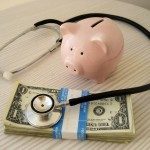 Believe it or not, New Yorkers, your health benefits got a little bit cheaper last year. Unfortunately, they’re still among the costliest in the country.

The average single-coverage premium for private-sector employer-provided insurance across the state dipped by 4 percent in 2016, to $6,614, according to federal survey data published Friday. Nationwide, the average single premium climbed almost 3 percent, to $6,101.

New York’s single premiums were the 5th highest in the country, down from second highest for 2015.

The state’s average premium for employer-provided also declined by 1 percent, to $19,375. Nationwide, family premiums were up 2 percent to $17,710.

Meanwhile, the percentage of private employers offering health benefits in New York dropped to 44 percent, down from 49 percent last year and 60 percent a decade ago. With the uninsured rates dropping both in the state and nationwide, the trend suggests a dramatic shift to government-sponsored health care – especially through the Medicaid program for the low-income and disabled, which now covers one in three New Yorkers.

These statistics, gathered by the Agency for Healthcare Research and Quality, focus retrospectively on the cost of health insurance provided by employers. They should not be confused with non-group premiums available through the state’s Obamacare exchange, the New York State of Health. Those prices increased by 7 percent in 2016 and 17 percent in 2017, and look to be heading for another double-digit hike in 2018.