As New York’s coronavirus pandemic exploded last spring, Governor Cuomo’s circle of regular contacts dwindled to a handful of close advisers, according to his recently released official schedules for March and April.

Only five people took more than 10 meetings with Cuomo in April 2020, compared to 15 people in March and 17 in February.

One of those top five, Health Commissioner Howard Zucker appears to be the only person with medical or public health training whom the governor regularly spoke to during that pivotal period. 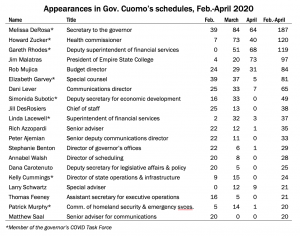 Although not necessarily a comprehensive record of the governor’s conversations, the schedules shed new light on his decision-making process during the early weeks of a public health disaster that has claimed the lives of almost 50,000 New Yorkers.

Cuomo often cited experts in his daily briefings last spring, but it’s unclear who besides Zucker he was turning to for ongoing scientific advice.

In a chapter from his memoir about early March, Cuomo said he took guidance from researchers at the World Health Organization, Drexel University, the State University at Albany, Imperial College in England and Dr. Michael Osterholm of the University of Minnesota.

However, his schedules for early February, March and April make no reference to Drexel, UAlbany, Imperial College or Osterholm. They list one phone call with Bruce Aylward of WHO on April 27, almost three weeks after New York’s coronavirus death toll had peaked.

In May, Cuomo announced that he had retained Osterholm and Imperial College to provide technical advice and data analysis for the state’s reopening process. Osterholm has since downplayed his involvement in New York policy and said he had only one five-minute conversation with Cuomo.

In a February meeting with Democratic legislators—referring to a later period of the pandemic—top Cuomo aide Melissa DeRosa said the governor spoke “on a regular basis” with Osterholm and Dr. Anthony Fauci of the CDC, and called them “chief advisers.”

The schedules for March and April show three phone calls with Fauci—for 15 minutes each on March 9 and March 12, and for as much as 30 minutes on April 13.

In addition to Fauci, Cuomo met once with Dr. Robert Redfield, the CDC director, and Dr. Susan Birx, the Trump administration’s coronavirus response coordinator. The governor also spoke four times to Dr. Stephen Hahn, the commissioner of the Food and Drug Administration.

Zucker—who has degrees in medicine, law and public health—was a frequent presence on the governor’s schedule, appearing 73 times in March and 40 times in April. But Cuomo’s contact with lower-ranking officials in the Health Department appears to have been limited.

One health-related group Cuomo consulted regularly was hospital officials. The words “hospital,” “medical center” and “health system” appear 288 times in his schedules for March and April—reflecting a series of large-group conference calls and smaller meetings.

“Nursing home” appears only twice, once in the title of a health system president and once in reference to an April 12 event, when Cuomo returned ventilators to Niskayuna nursing home that had loaned them to hospitals during the peak of New York’s crisis in early April. Nursing homes accounted for roughly one-third of the pandemic’s death toll, and the Cuomo administration sought to keep the full count of fatalities secret until last month.

Kenneth Raske, the president of the Greater New York Hospital Association, participated in seven meetings with Cuomo between March 2 and March 30. Michael Dowling, CEO of Northwell Health and longtime Cuomo associate, was listed at six meetings in March and three in April.

One call involving Raske took place on March 17, eight days before the Health Department issued its controversial order requiring nursing homes to accept COVID-positive patients being discharged from hospitals—a policy driven by crowding in some hospitals that appears to have contributed to higher death rates in nursing homes. Raske has acknowledged proposing that policy to the governor’s office.

Apart from Zucker, the other aides Cuomo met with most often in April were DeRosa, secretary to the governor; Rob Mujica, budget director; Gareth Rhodes, deputy superintendent of financial services, and Jim Malatras, the then-president of Empire State College who was later elevated to chancellor of the State University of New York.

Other staff members with whom Cuomo took regular meetings in February and March appeared rarely or not at all in his April schedule, including Elizabeth Garvey, special counsel, Dani Lever, communications director, Jill DesRosiers, chief of staff, Rich Azzopardi, senior adviser, and Kelly Cummings, the director of state operations.

Cuomo himself traveled by air 47 times over the three-month period, making 20 trips each in February and March and seven in April.

The governor’s schedules for March and April show nine calls or meetings with President Donald Trump, eight with Vice President Mike Pence and 17 more with other White House officials or cabinet members.

He met jointly with Senate Majority Leader Andrea Stewart-Cousins and Assembly Speaker Carl Heastie six times in February and four times in March—compared to a total of six meetings during the same period of 2019.

The schedules also document a burst of media attention as New York suffered one of the most severe outbreaks in the world. His TV and radio appearances jumped from 10 in February to 56 in March and 34 in April. The lion’s share of his interviews were with CNN, which aired him 39 times, including eight appearances hosted by his brother, Chris. He also recorded 25 interviews with MSNBC, 16 with Alan Chartock of WAMC in Albany, and two with Sean Hannity of Fox News.

Released last month, the schedules for March and April provide the only publicly available record of the governor’s interactions, but they are not necessarily complete. A disclaimer at the bottom of each month’s listing says they contain “all official events” of the governor and his fund-raising committee, as well as use of the state aircraft. “Other unofficial and personal events as well as information that might tend to compromise security have not been included.”