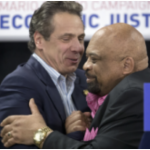 In a replay of the notorious Pataki-Rivera deal of 2002, the Cuomo administration has quietly ordered a multi-billion-dollar Medicaid rate increase for hospitals and nursing homes, with the money earmarked to boost employee pay and benefits.

According to a memo circulating among industry insiders, the rate increase is to be financed with funds that Governor Cuomo extracted from the sale of Fidelis Care in exchange for state approval of the transaction.

It says an update of the state’s Medicaid plan further explaining the rate increases “will be available for public review” on the website of the Department of Health. That update did not appear to have been posted as of mid-day Friday.

However, the Cuomo administration has been briefing industry groups, and LeadingAge, a coalition of not-for-profit nursing homes and other long-term care providers, shared further details in a Nov. 1 memo to its members.

“Good news,” the memo said. “All nursing homes in the State will be receiving an increase to their Medicaid rates to reflect increases in workforce costs, with supplemental funding available to facilities for recently settled collective bargaining agreements. These increases are being funded from proceeds to the State from the sale of the insurer Fidelis Care to Centene, and we are advised that the increases do not require additional authority from the Legislature to be implemented.”

Institutions that have contracts with 1199 SEIU, the political influential labor union, are due to receive extra funds, the memo says:

According to our understanding, these nursing homes would receive added funding reflective of 85 percent of the additional compensation costs associated with the new collective bargaining agreement, net of the value of the 1.5% trend factor adjustment. Certain details are still being worked out, including whether and how nursing homes with pre-existing SEIU 1199 labor agreements will receive supplemental funding over and above the 1.5% adjustment.

The move is reminiscent of 2002 deal between then-Governor George Pataki and former 1199 leader Dennis Rivera, under which the state’s Medicaid program spent $1.8 billion over three years to finance raises and benefit enhancements for health care workers. The union, normally an ally of Democrats, endorsed the Republican governor for re-election later that year.

At the time, Cuomo, who was then making an ill-fated run for governor, criticized Pataki for negotiating the deal in secret. But that rate increase took the form of legislation that was discussed with Assembly and Senate leaders and submitted to the full Legislature for approval.

In this case, the Cuomo administration is ordering a similar increase through executive power, with only 24 hours’ notice and no formal input from the Legislature.

Now headed by George Gresham (photo), 1199 gave its endorsement to Cuomo in February.

To pay for the deal, Cuomo is dipping into a one-time windfall of cash: the $2 billion in proceeds from the Fidelis-Centene sale—which the state’s Roman Catholic bishops (who controlled Fidelis) and Centene officials agreed to share with the state, quasi-voluntarily, under heavy pressure from the governor. The rate increase deal is expected to cost $1.35 billion over four years, to be matched with a similar amount of federal aid.

The Fidelis-Centene money is flowing to a “Health Care Transformation Fund,” which, under terms of this year’s state budget, Cuomo is authorized to spend on a wide range of health-related purposes without notifying the Legislature until 15 days after the fact.

Cuomo’s campaign to claim the Fidelis-Centene proceeds was supported by an advertising campaign sponsored by the Healthcare Education Project, jointly funded by the Greater New York Hospital Association and 1199, which was the biggest-spending lobbyist in Albany for the first six months of the year.

The lobbying campaign, like Cuomo’s January budget proposal, called for the state to establish a “Health Care Shortfall Fund,” to offset anticipated cuts in federal funding. But the name and purpose of the fund changed by the time the budget was finalized in late March, when it was clear that major federal cuts would not happen in the near future.