After three years of artificially suppressing the price of certain health plans – and watching one insurance company collapse financially – state officials are dialing back the regulatory pressure.

On Friday, the Department of Financial Services authorized premium hikes averaging 16.6 percent for policies sold in the individual market for 2017, the largest increase by a factor of two since the ACA took full effect (see chart).

While the deference from newly installed DFS Superintendent Maria Vullo is welcome and necessary, it amounts to loosening handcuffs that shouldn’t exist in the first place. 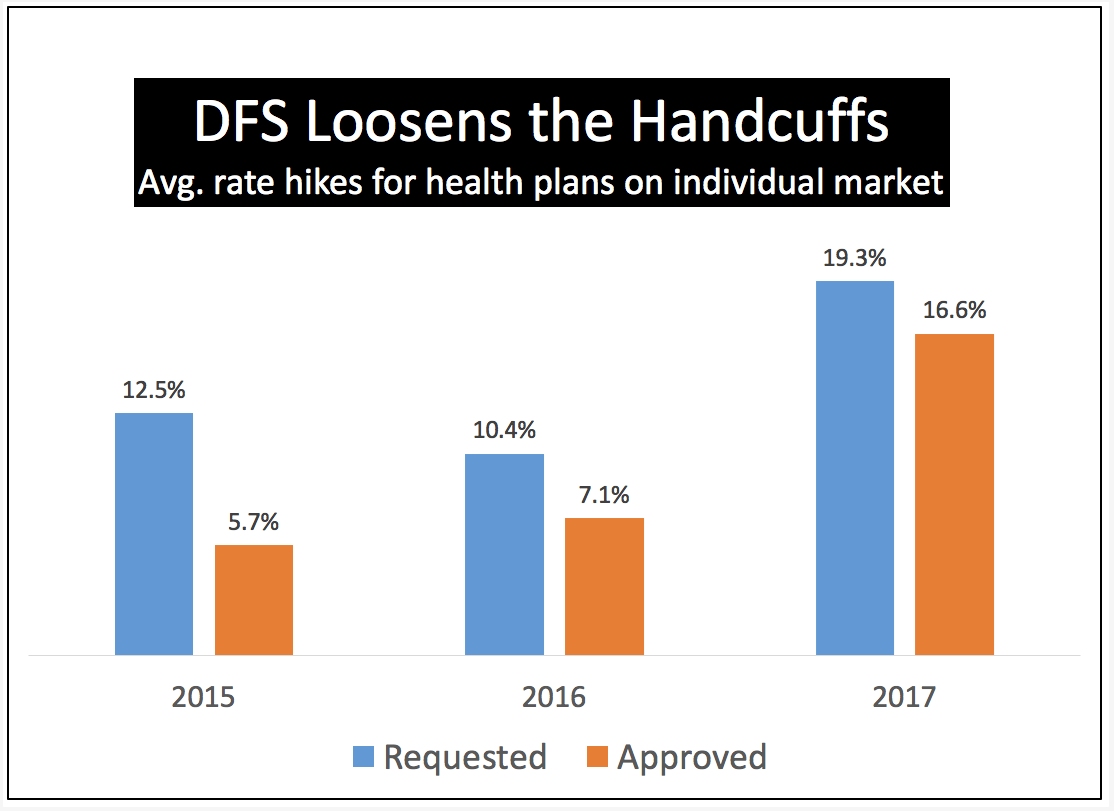 The 16.6 percent average applies to policies sold directly to individuals (that is, not through employers), mostly via the state’s purchasing exchange, the New York State of Health. The approved hikes ranged from a low of 6 percent for Schenectady-based MVP Health Plan to a high of 80.5 percent for Crystal Run Health Insurance Co. of the mid-Hudson Valley.

The average increase was just three points lower than what plans requested, making it the smallest downward adjustment of the ACA era. Two years ago, the department slashed requested rates for 2015 policies by an average of more than half.

In an even more dramatic shift, the department ordered several plans to increase premiums beyond what they requested for 2017, the first time DFS has taken that step since “prior approval” of health premiums was reinstated by lawmakers in 2010.

For example, the department directed MetroPlus, a plan sponsored by the 11 financially troubled New York City-owned hospitals, to raise its individual-market rates by 29.2 percent, almost half again higher than the 20.3 percent it requested. Care Connect, affiliated with Long Island’s Northwell Health, was told to hike its small-group rates by 23.2 percent instead of the 16.8 percent the company wanted.

That was a clear sign that regulators are concerned about the plans’ fiscal health – and eager to avoid another costly collapse, like that of Health Republic in 2015, which displaced 215,000 members and left behind tens of millions in unpaid claims.

In the small group market, which has seen less turmoil, the average approved premium hike was 8.3 percent, roughly in line with the past two years. The department’s actions had no effect on large-group health plans with more than 100 members, which are exempt from price regulation by DFS.

Officials said the hikes were driven in part by generally rising health costs – especially a spike in spending on prescription drugs – but also by factors specific to the ACA. A federal reinsurance program that subsidized plans offered through Obamacare is ending this year, which accounted for 5.5 percent of the rate increase, the department said.

Still, the prior approval law that empowers DFS to cut prices at all remains unnecessary, redundant, ineffective, and dangerous.

Prior approval is redundant because a separate law requires health plans to spend at least 82 percent of their revenues on medical claims. If they fall short, DFS can compel them to pay refunds.

The law is ineffective because premiums are actually rising faster here than in the rest of the country. Since 2010, when prior approval took effect, the average premium for small-group plans regulated by DFS jumped 26 percent, compared to the national average of 19 percent, according to federal data. New York’s plans went from being the 13th most expensive among the 50 states to the fourth. This suggests that premiums are driven by underlying costs – including highest-in-the-nation taxes on insurance and costly coverage mandates – that health plans can’t control.

And prior approval is dangerous because it distracts from, and conflicts with, the primary duty of insurance regulators, which is to make sure health plans have the wherewithal to pay claims when their customers get sick. This DFS did not do in the case of Health Republic. To the contrary, it repeatedly denied the money-losing startup’s full rate requests, most recently in July 2015, just eight weeks before forcing it to shut down.

Another danger is that New York’s hostile regulatory climate will drive companies out of the individual market, reducing choice and competition for consumers. The nation’s largest insurer, UnitedHealthcare, has already pulled out of most Obamacare exchanges and is considering doing the same in New York. For 2017, it applied for two rate increases in the individual market, of 26.8 percent and 45.6 percent, among the steepest of the year. On Friday, DFS chopped those requests by 15.3 and 17.6 percentage points respectively, more deeply than any other plan’s.

Had UnitedHealthcare received its full increases, its plans would have been among the most expensive available in the state’s individual market. But if some New Yorkers were willing to pay those prices, why should their state government get in the way?

Arguably, the only way DFS should interfere with health premiums is to increase them, as necessary, to prevent a repeat of the Health Republic fiasco. Otherwise, it should give market forces a chance to do their work.