w York emerged as the second-costliest state for employer-sponsored health insurance after its premiums rose at more than three times the national rate in 2015, according to just-released federal data.

The average single-coverage premium in New York last year was $6,801, second only to Alaska, with its small, thinly spread population, at $7,807, according to survey figures from the Agency for Healthcare Research and Quality. The U.S. average was $5,963.

While nationwide single premiums grew by a modest 2.2 percent for the year, New York’s jumped by 7.8 percent.

Premiums have long been high in New York, but the problem shows signs of getting worse. The affordability gap between New York’s single coverage prices and the national norm surged to 14 percent in 2015, the highest in at least two decades. The Empire State’s No. 2 ranking is up from 10th in 2010 and 18th in 2003.

The trend comes in spite of aggressive price regulation by the state Department of Financial Services, under a so-called prior approval law that was reinstated in 2010. In each year since, regulators have cut nearly every rate increase requested by health plans, sometimes by more than half. Among the companies affected was Health Republic Insurance of New York, a startup that was sustaining heavy losses. Its rate request for 2016 was trimmed just weeks before it was declared insolvent and shut down by the state.

Industry officials charge that the department’s decisions have been driven more by a political desire to suppress consumer costs than good actuarial practice.

The prior approval law applies to only a portion of the market: policies purchased by individuals and small businesses, including everyone buying coverage through the state exchange established under President Obama’s Affordable Care Act. Most large employers’ health benefits are exempt from state oversight under federal law.

Yet the affordability gap for New York’s small businesses stood at 16 percent in 2015 (see chart), which is two points higher than it is for employers as a whole. While the gap fluctuates considerably year to year, 16 percent is its highest point since 2006. 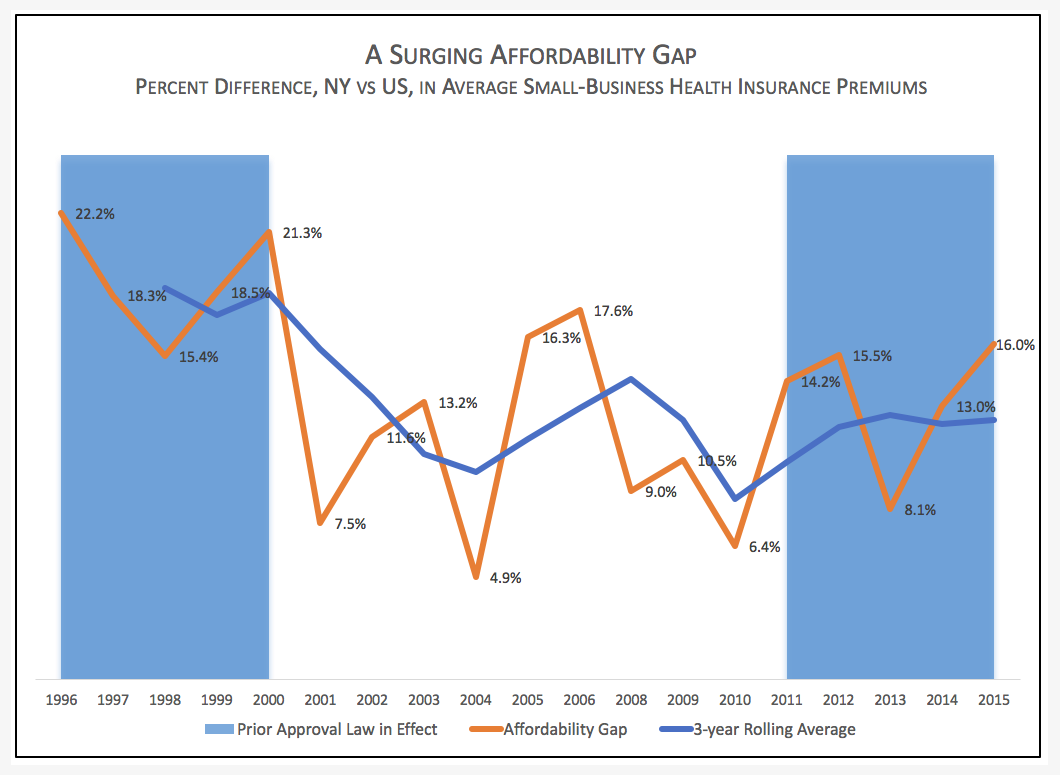 The ineffectiveness of prior approval suggests that what’s driving the state’s unusually high premiums is not health plans’ pricing decisions in a competitive marketplace, but the costs they face. These include New York’s steepest-in-the-nation taxes on health insurance and Albany-imposed coverage mandates that add an estimated 12 percent to the typical premium.

Politico reported this week that most New York health plans, like many nationwide, are losing money on the individual and small group policies sold through Obamacare exchanges, a trend that the news site called a “structural threat” to the national health reform law.

State regulators face a dilemma: If they approve steep rate hikes requested by insurers, coverage will become even less affordable for small businesses and individuals shopping on the ACA exchanges (especially for those whose incomes are too high to qualify for ACA tax credits).

But if regulators continue suppressing premiums, plans could choose to walk away from New  York’s small business and individual markets, reducing choice for consumers and potentially pushing more people back into the ranks of the uninsured.