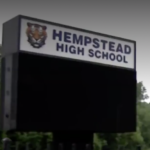 The state overseer of Long Island’s troubled Hempstead school district says the district is making “solid progress in every area.” At the same time, he’s warning of a “very serious” financial outlook due to a projected increase in the number of Hempstead school children attending charter schools—which would indicate parents don’t actually think progress is occurring.

The mixed assessment is part of the most recent quarterly report from Jack Bierwirth, a retired longtime Long Island school superintendent assigned by the state two years ago to try and straighten out the educational and managerial mess in the 7,300-student Hempstead district.

The problems in Hempstead are similar to many of the state’s urban school districts: too many students failing to meet grade level state academic standards, fiscal imbalances and inadequate leadership. The appointment of a monitor can highlight problems, but he ultimately is not equipped by the state to solve them.

Hempstead doesn’t have a permanent superintendent of schools or assistant superintendents in key areas. The inability to fill such positions is a sign of the district’s continuing dysfunction.

The district’s student outcomes on state standardized assessments in English and math, administered in grades 3-8, continue to be poor.  In 7thgrade, for example, only 13 percent of the students met or exceeded state standards in both subjects this past school year. For elementary grades, only about one-third of the students met standards, with little positive change from recent years.

This does not indicate “significant progress” as the report claims. Rather, there remains an academic crisis in Hempstead that two-thirds or more students in elementary and middle school are not at grade-level reading and math.

Bierwirth projects more Hempstead students will enroll in charter schools that will result in $11 million in added cost to the district in the next two years, requiring “substantial cuts” to accommodate.

Nowhere does Bierwirth explain how he calculated the $11 million figure. For example, he didn’t share specifics of his assumptions about charter school enrollment growth. For every charter school pupil, the district currently pays tuition of $19,578 (about two-thirds of Hempstead’s total per-expenses). Bierwirth also didn’t specify the estimated cost of required bus transportation for those additional students, which would also be included in such an estimate.

Based on expected enrollment figures provided by the Education Department and the SUNY Charter Schools Institute, however, it looks like Hempstead will incur something closer to between $3 and $4 million in added charter expenses by the 2021-22 school year—a lot less than $11 million. Unfortunately, based on Bierwirth’s report, Newsday recently highlighted the $11 million figure, which gives Hempstead property owners the erroneous impression that charter schools are threatening to drive up their taxes.

There are four charter schools in Nassau County that educate Hempstead students, all of which produce much better academic outcomes than Hempstead on annual state assessments. Two of them are increasing enrollment levels in the next two years by fewer than 300 students. Students from Hempstead will comprise part, but not all, of this enrollment growth since the Uniondale charter is located in the Uniondale School District where its resident students get admission preference over non-residents.

The very existence of charter schools in or near Hempstead reveals two major issues:  the state felt compelled to approve them for Hempstead parents as an alternative to the district public schools; and many Hempstead parents continue to respond by enrolling their children.

Until the Hempstead School District resolves its leadership and academic crisis, charter schools will continue to be an appealing solution, not the problem, for parents eager for an educational alternative.