In the publishing business, the annotation “TK” is used in manuscripts to indicate some important piece of information is “to come.”  Gov. Andrew Cuomo’s 2011-12 Executive Budget is a book draft with an impressive cover and a promising theme: “Transformation.” The premise is compelling: “We spend too much, we get too little, and it makes us economically uncompetitive.” Yet in many chapters, the plot turns are still TK.

For example, Cuomo says the state will reduce Medicaid spending by $982 million (1.8 percent) on a year-to-year basis through reforms such as TK (to be determined by a Redesign Team including “stakeholders” from the the very industry groups and labor unions that feed on the bloated Medicaid program).  The state will help localities cope with lower aid by repealing costly mandates, including TK (on which another Redesign Team will make recommendations).  In light of declining inmate populations, he will consolidate TK prisons (a task force will recommend specific closures 30 days after the budget is due to be finalized).  Spending on the state’s workforce will be reduced as a result of an agreements by public employee unions to TK (with nearly 10,000 layoffs threatened if concessions are not forthcoming).

Cuomo kept his campaign promise to balance the budget without proposing new taxes or new borrowing–if you don’t count another $386 million in savings to be realized by “amortizing” a chunk of the state’s pension fund bill, as permitted under a law signed by Governor David Paterson last year and assumed in the long-term financial plan ever since.  (As for pension reform, that’s yet another TK.)

The governor also launched a public campaign to overhaul the financial planning process in New York State by discarding the current-law baseline model, which leads to projected spending increases that account for the lion’s share of projected budget gaps. On the eve of the budget presentation, he scored his first solid (if partial) legislative win with the Republican-controlled Senate’s passage of his proposed property tax cap, setting the stage for a confrontation with Assembly Democrats. 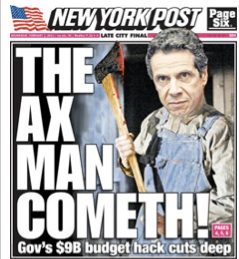 While today’s New York Post depicted the governor as an ax murderer man, a barber’s smock would have been a better fit.  The budget calls for haircuts, not amputations.  Not that it will be easy.  (Ever try to cut the hair of a squirming, screaming two year old?)  Giving Cuomo the benefit of a doubt, keeping the reform details vague for as long as possible is a way to keep potential adversaries guessing while keeping options open. On the Medicaid side, in particular, Cuomo has armed himself with appropriations language that would give the governor discretion to cut the budget down to size if the “team” fails to agree on another way to get there.

In terms of gross spending, how audacious is Cuomo’s proposal compared to those introduced by the last New York governor to actually reduce spending, George Pataki?  The question is not easy to answer quickly because the proposed budget’s underlying financial plan features more accounting quirks than usual.

This in part reflects the impact of federal stimulus funding, now effectively a 12 percent supplement to general fund spending.  All but $1 billion of the $6.5 billion in stimulus will disappear in the fiscal year that starts April 1 — and the rest will vanish the year after that, accounting for 40 percent of the gap still projected for 2012-13.  The accounting changes also include an agreement by the Division of the Budget (DOB) to “reclassify” several billion dollars in federal grants as State Operating Fund expenditures, making the financial plan consistent with the state comptroller’s accounts but inconsistent with past measures.

The official numbers say Cuomo is proposing spending increases of 2.9 percent in the General Fund and 1 percent in the broader, more inclusive State Operating Funds category. This is misleading, though. Counting the vanishing stimulus as part of the budgetary base (which, after all, it has been), Cuomo is proposing what amounts to a net reduction of 2.7 percent in what would normally be considered General Fund spending, same as the official rate of decrease in the all-inclusive All Funds budget figure of $132 billion.

Making further adjustments to include all items normally financed by state revenues, the proposed State Operating Funds appears to be down about 1 percent from the current year.  By comparison, as shown below, Pataki proposed larger spending reductions in 1996-97.  In its broad outlines, Cuomo’s first budget most closely resembles the proposal unveiled by Pataki in 2003-04, the beginning of the Republican governor’s third term, when projected budget gaps were roughly the same as those heading into 2011-12. 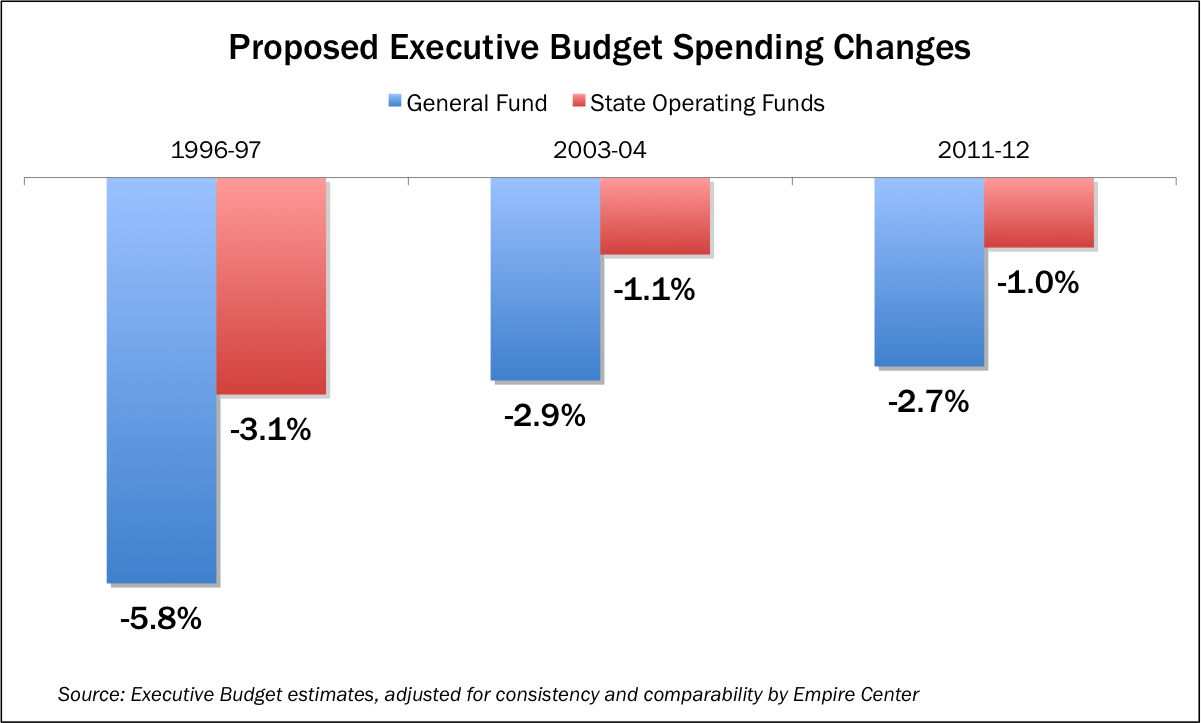 The first of the two Pataki proposals depicted above led to the adoption of State Operating Funds budget that was essentially flat, along with an All Funds spending level that was actually lower than the previous year’s.  The second ended less happily, with hundreds of legislative veto overrides, billions of new spending, and a very large temporary tax hike. Indeed, the budget enacted over Pataki’s objections in 2003 dealt a crippling blow to the governor’s credibility and opened the floodgates for years of unsustainable spending, which continued (at a slightly slower pace) right through the financial crisis and recession of the last three years.

Cuomo needs to do better, of course; even a nominally flat budget would require him to surrender on too many fronts. There appears to be relatively little “move money” for the Legislature to play with in a financial plan that already contains $800 million in one-shot revenues.

The governor’s challenge, then, is to fill in those TKs will real, structural reform.  The result could be a real page-turner–with a happy ending.