That’s the rate at which New York state government is spending taxpayer dollars. And that doesn’t even include spending by counties, municipalities, school districts or other local public entities.

In total, the state’s multiple levels of government burn through more than $190 billion a year from their own revenue sources, mainly taxes. Another $60 billion comes the federal government – which has its own claim on our wallets.

But where does it all go? Thanks to the digital revolution, anyone with access to the Internet can begin to find some answers to that question.

The Freedom of Information Law allows the public and the media to put government actions under the magnifying glass.

In 2008, the Empire Center launched SeeThroughNY.net, featuring easily searchable public payroll, pension, local expenditure, and contract data. The site attracts more than a million unique visitors every year and more than 30 million pages have been viewed since it debuted.

Clearly, there’s a public appetite for information on how our tax dollars are spent. 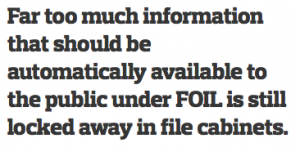 However, there’s plenty of room for improvement.

As anyone who’s ever filed a Freedom of Information Law (FOIL) request knows, getting data from any level of government isn’t always easy. Far too much information that should be automatically available to the public under FOIL is still locked away in file cabinets and computer hard drives – released only to those who ask in writing, if even then.

That’s why the Empire Center drafted the See-Through Government Transparency Act, model legislation that would update the state’s Freedom of Information Law by, among other things, requiring governments to proactively post data they are required to release in response to FOIL requests. The proposal creates a central depository, which could easily be built from legacy systems already created at the state level, into which all levels of government could “dump” data that is clearly deemed available for public inspection under FOIL.

The benefits of implementing such a system would be multifaceted. Taxpayers would gain quick, easy access to the government data to which they are entitled. Governments would ultimately save time and money – two precious and scarce resources – by reducing the volume of FOIL requests they are required to address. Access to data is also a simple means to add continuous accountability and public oversight to the government process.

This doesn’t require a public investment in costly software with lots of bells and whistles. In fact, at this point, our elected officials really don’t need to spend any more time or money figuring out how public information ought to be presented. If governments routinely file all of their “FOIL-able” data and documents in an open online depository, the users will figure out the rest. That’s the beauty of the Internet.

As the state Legislature declared in enacting the FOIL law almost 40 years ago, “the people’s right to know the process of governmental decision-making and to review the documents and statistics leading to determinations is basic to our society.”

The law needs to catch up to advances in technology. It’s our money, our governments and our data. So open it up to us, please.