In fact, the financial incentive for high earners to move themselves and their businesses from New York to states with low or no income taxes has never—ever—been higher than it already is.

Adding three full percentage points to what, in New York City, is already the nation’s second steepest maximum tax rate could easily be a final push out the door for an unknown number of high earners. Most of them, it should go without saying, already own second (and third) homes in lower-taxed jurisdictions, and are well acquainted with the checklist of steps they’d need to take to change their state tax domiciles without a hassle from New York State’s aggressive tax auditors.

Where the budget players line up

With the April 1 start of the 2022 fiscal year looming, an increase in the personal income tax (PIT) burden on New York’s highest earners seems almost inevitable—even though, as noted in this space three weeks ago and finally acknowledged by Governor Cuomo yesterday, a tax increase isn’t needed to produce a balanced budget that would include a more or less typical Cuomo-era spending increase (that is, 3 or 4 percent, transformed by accounting maneuvers to 2 percent).

It was Cuomo himself who put a tax hike on the budget table to begin with, proposing a three-year temporary PIT hike ranging from 0.25 percentage points starting at incomes of $5 million to a full 2.0 percentage points applying to stratospheric income levels of $100 million. Even though projected state tax receipts for this year and next  have risen $5 billion since Cuomo’s Jan. 19 Executive Budget rollout, he still hasn’t explicitly backed off of his tax increase proposal.

Assembly and Senate Democrats went much further in their non-binding one-house budget resolutions last week, favoring slightly different versions of a permanent tax increase designed to raise $4 to $5 billion (out of a total of $7 to $8 billion in tax hikes) by jacking up the top rate on millionaire earners from 8.82 percent to 11.85 percent—plus what amounts to a penalty point on capital gains. The differing proposals—along with comparisons to current law, permanent law, and a sample of tax levels in selected competing states—are summarized in the table below. 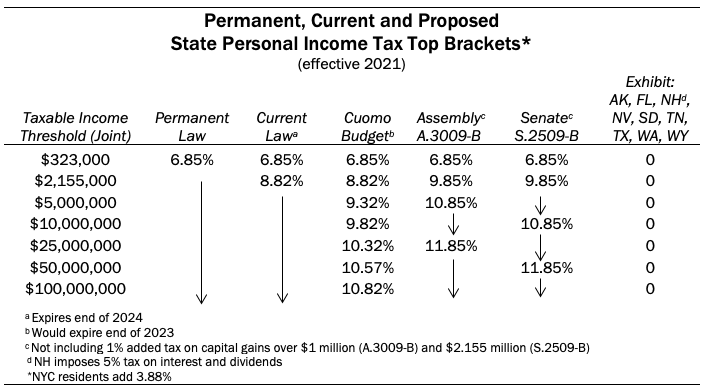 Including the added income tax rate in New York City, where a little over half the state’s resident millionaire earners live, the combined state-local income tax came to 12.7 percent. But prior to 2018, the effective marginal rate—that is, New York’s net marginal tax rate after adjusting for the state and local tax (SALT) deduction on federal returns—was 8.8 percent.

When the federal Tax Cuts and Jobs Act of 2017 capped SALT deductions at $10,000, millionaire filers who typically pay six or seven-figure sums to the city and Albany essentially lost one of their biggest federal tax breaks.

As a result, the effective state-local marginal rate for city residents jumped in a single year to the state-local statutory level of 12.7 percent—by far the highest level since the city income tax was adopted in 1966, as shown below. 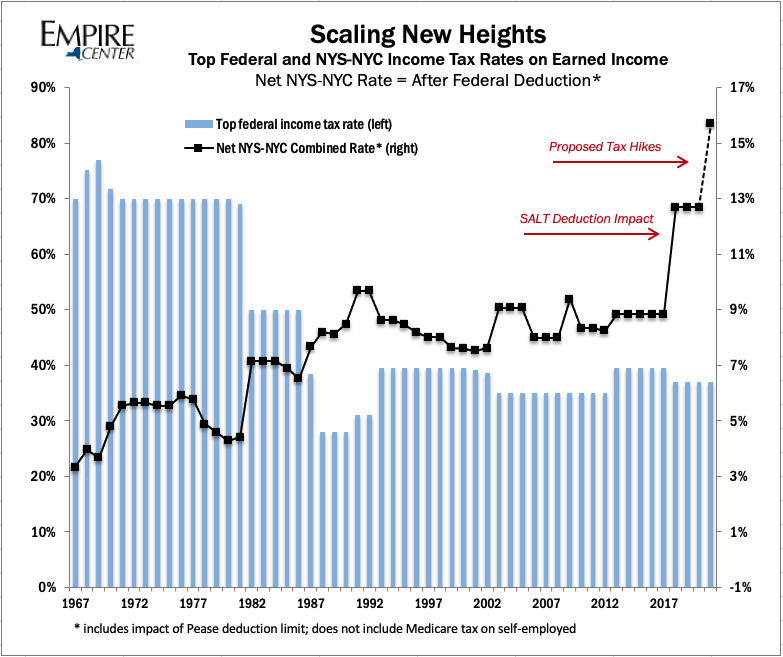 The trend line illustrates an important feature of the interplay between federal and state income tax laws. The high federal rates of the 1970s effectively minimized the net impact of New York’s own double-digit income tax rates at that time. When the federal rate was reduced during the Reagan era, the net effective marginal rate in New York increased. The state responded in part by reducing its own rates, starting under Governors Hugh Carey and Mario Cuomo, and continuing under Governor George Pataki.

Over the past 20 years, the combined state-city effective marginal rate in New York City has fluctuated in a fairly narrow range, from 7.3 percent in 2001 to 9 percent in 2003-05, reflecting a temporary state tax hike in effect then. The effective top rate was 8.8 percent from 2013 through 2017.

The loss of the SALT break also more than offset the marginal rate reduction from a two percentage cut in the top rate, which went from 39.6 percent to 37 percent. As shown above, the all-in tax rate in the city increased increased slightly, to nearly 50 percent. For self-employed filers, the all-in marginal rate now tops 53 percent.

President Biden will soon roll out a $3 trillion infrastructure bill that is expected to include an array of federal tax increases, including a restoration of the 39.6 percent top rate on the individual income tax. Assuming Biden also intends to restore the “Pease” limitation on itemized deductions (as assumed in his campaign plan), the combined federal-state-local rate in New York City would top out at 52.3 percent, compared to 48.45 percent in 2017.

New York’s leading Democrats, Gov. Cuomo and Senate Majority Leader Charles Schumer, have both attached a high priority to restoring the SALT deduction. But Biden’s own past tax proposals don’t quite go that far. During his campaign, he proposed capping itemized deductions, not just SALT, at their value in the 28 percent bracket, similar to a proposal in most of President Obama’s budgets and in Hillary Clinton’s 2016 campaign tax proposals. Compared to the 2017 status quo, this would effectively boost the net marginal state-local rate in NYC by 1.47 percent, to nearly 10 percent.

Biden also has favored imposing the 12.4 percent social security payroll tax on all filers with taxable incomes starting at $400,000, with half paid by employees and half by employers, thus adding 6.2 percent to the marginal rate.

The combined effect of changes favored by the President would raise the all-in federal-state-local income tax marginal rate for New York City residents to 60 percent—not including up to three additional percentage points, depending on which tax hike plan is part of the forthcoming state budget.