With two weeks to go before the start of New York State’s 2022 fiscal year, Democratic majorities in the Assembly and Senate have staked out similar budget priorities calling for the biggest spending hikes on record while boosting business taxes for the first time since the early 1990s—and permanently increasing the state’s top personal income tax rate to its highest level in more than 40 years

One-house budget resolutions, such as those due for votes in the Senate and Assembly today, are non-binding place-setters for budget negotiations with the governor. Assembly and Senate leaders traditionally have used them to signal support for a combination of serious budget priorities and for proposals they know will not be accepted by the other house, or by the governor, or both.

This year, however, marks the first time that both the Senate and Assembly majorities have endorsed similarly large tax increases, raising a total of $7 billion each, according to their own respective estimates. And it comes during an existential political crisis for Governor Cuomo, who retains strong constitutional budgeting powers but whose long-term job security appears to be in jeopardy due to his concealment of nursing home COVID-19 death data and sexual harassment allegations now under investigation by the state attorney general’s office.

Cuomo retains the ability to veto line item spending additions to his budget appropriations as well as any revenue bill passed by the Legislature, subject to an override by two-thirds of the members in each house. Democrats control supermajorities in both the Assembly (by a margin of eight votes out of 107) and the Senate (by a margin of two out of 43), and relations between the Legislature and governor are strained, to say the least, now that Senate Majority Leader Andrea Stewart-Cousins has called for Cuomo’s resignation, and Speaker Carl Heastie has authorized an impeachment investigation.

Even if Cuomo can make a veto (or veto threat) stick, and if the final budget deal doesn’t include this whopper of a soak-the-rich tax hike, many in the targeted class of high earners could see it as a harbinger of things to come. In that case, more of them are likely to react by reconsidering their presence in New York.

The highest-earning 1 percent of New Yorkers already pay 44 percent of income taxes collected from state residents, and a surge in capital gains taxes from high earners is the major reason why state tax receipts have recovered more strongly than Cuomo had projected earlier in the pandemic. In the absence of spending restraint, the push to tax income millionaires easily could give way to higher taxes on the middle class in a few more years.

Both houses also have rejected Executive Budget appropriations language designed to perpetuate an expansion of Cuomo’s ability to reduce or withhold spending in case of revenue shortfalls. If the governor digs in on this point it could set the stage for the first big constitutional budget powers lawsuit since the Silver v. Pataki cases of 20 years ago.

Given the enormous infusion of stimulus aid flowing to New York State and its local governments under the American Rescue Plan Act just signed by President Biden, plus a roughly $5 billion increase in the state’s own tax receipts projections since Cuomo introduce this budget Jan. 19, no tax increase at all would be required to support a modest increase in state-funded spending in the fiscal year that starts April 1. New York’s jobs recovery has been anemic by national standards, and its economy remains fragile, yet the Legislature is aiming to spend as if certain of a sustained boom. As usual, the biggest added commitment would affect the largest single budget category, school aid. Both houses favor much larger multi-year education spending increases including the three-year phase-in of a $4 billion “Foundation Aid” formula boost first proposed by Governor Spitzer in 2007 but never implemented due to the fiscal crunch of the Great Recession.

Excluding federal aid, the Assembly bill would boost state-funded spending by $8.7 billion—which would translate into increases of 23 percent in general fund spending and 10 percent in the broader state operating funds budget, both of which would rank as the biggest single-year increases on record. Aided in recent years by delays in Medicaid payments and other book-keeping maneuvers, Cuomo since early in his tenure has sought to hold annual state operating funds spending increases to 2 percent, and had opened this year’s budget bidding with a spending hike of 1.3 percent.

Apparently anticipating a legislative “tax the rich” push, Cuomo’s Executive Budget proposed a temporary three-year personal income tax (PIT) surcharge of 0.5 to 2.0 percentage points atop the current (and also temporary) “millionaire tax” rate of 8.82 percent, which was last extended in 2019. Cuomo estimated this tax hike would raise $1.5 billion next year.

Both the Assembly and Senate revenue bills would go much higher than that by permanently raising the top PIT rate to 11.85 percent—its highest level since 1979, when it stood at 12 percent.  The main differences are the income bracket thresholds, as shown below. 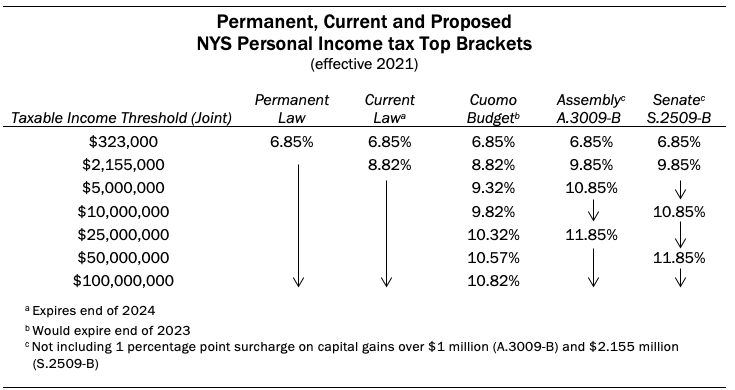 Including the existing New York City top rate of 3.88 percent, the Legislature aims to boost the top rate for city residents to a whopping 15.73 percent, which would be the highest in the country, 2.43 percentage points higher than California’s top rate.

Both the Assembly and Senate would add a full percentage point of added taxes to capital gains incomes—starting at $1 million for all filers under the Assembly version, and at the current millionaire-tax brackets in the Senate version. Including this surcharge, taxes on capital gains in New York would be boosted to their highest level since 1977.

While supporters of steeper tax rates frequently hearken back to the 1970s peak rates as a precedent, they consistently fail to reckon with the significant impact of the 2017 federal tax law and its virtual elimination of the state and local tax (SALT) deduction in the top brackets. In the 1970s, the top federal rate was 70 percent—meaning the SALT deduction effectively offset 70 percent of the cost of the state and local income rate, reducing the net effective marginal rate to 3.56 percent, or a combined state-local marginal rate of 4.89 percent in New York City.

Other noteworthy features of the revenue bills favored by the legislative majorities: