The health insurance industry’s rate applications for 2021, posted this month by state officials, reveal deep uncertainty about the long-term impact of the coronavirus pandemic on medical costs.

These conflicting predictions resulted in starkly varying premium applications, ranging from a 29 percent increase requested by Oscar Health Insurance for its small-group coverage, to a 4 percent reduction proposed by Independent Health Benefits Corp. for individual coverage (see tables below).

The weighted average of the requests was 11.7 percent for non-group coverage and 11.4 percent for small groups of up to 100 employees. Neither figure is especially high compared to requests over the past six years, and DFS typically approves rates that are lower than what companies requested.

Further complicating the picture, most plans can expect to lose a chunk of their paying customers due to the sudden economic downturn and widespread layoffs.

One exception to that rule is Fidelis Care, which primarily contracts with Medicaid and other government-funded safety-net programs, and whose parent company, Centene Corp., is forecasting an enrollment surge.

Under the state’s “prior approval” law, health insurers are required to submit their proposed individual and small-group premiums for the following year in mid-May. The timing meant that plans were obliged to prepare their applications to the Department of Financial Services in the midst of a major infectious disease outbreak that triggered an unprecedented shutdown of much of the economy.

In the short term, the net impact for many plans has been a big drop in claims, as hospitals were obliged to stop elective procedures and many routine office visits were cancelled or postponed. Aetna, for example, reported a 30 percent drop in claims during April. From March to April, Centene reported that non-inpatient claims were down 32 percent, emergency room claims were down 46 percent, and inpatient authorizations were down 15 percent.

In its application form for 2021 premiums, DFS asked plans to specify how the cost of coronavirus treatment would affect rates. Actuaries for some plans, such as Healthfirst, anticipated no impact at all, assuming that claims would hold steady or remain lower.

Others plans anticipated that pent-up demand for care that was postponed during the pandemic would lead to a rush of claims in the future. Oscar expected coronavirus would add 5.1 percent to its medical costs, and Fidelis put the impact at 11.5 percent.

An adjustment was included to account for the anticipated costs associated with the introduction of a vaccination in the 2021 plan year. Oscar assumed a 90% adoption rate across the projected membership distribution and a cost of $100 to administer the vaccination. The estimated impact on an allowed cost basis is 1.5%.

Lastly, an adjustment was included to account for the anticipated costs associated with the introduction of antibody testing. Oscar assumed a 100% adoption rate across the projected membership, an average of 1.5 tests per member, and a cost of $150 to administer each individual test. The estimated impact on an allowed cost basis is 3.8%.

The impact of risk adjustment was particularly severe for Oscar, which said its payments under that program accounted for $361 of its proposed monthly small-group premium of $896. Oxford Health Insurance, which serves more than half of the state’s small-group market, said risk adjustment would reduce its rates by 1.7 percent.

The rate applications cover only a portion of the state’s commercial insurance market. Large-group and self-insured plans are exempt from state regulation.

Experience suggests that this regulatory process is failing to result in significant cost savings for consumers. New York’s employer-sponsored premiums are among the highest in the U.S. 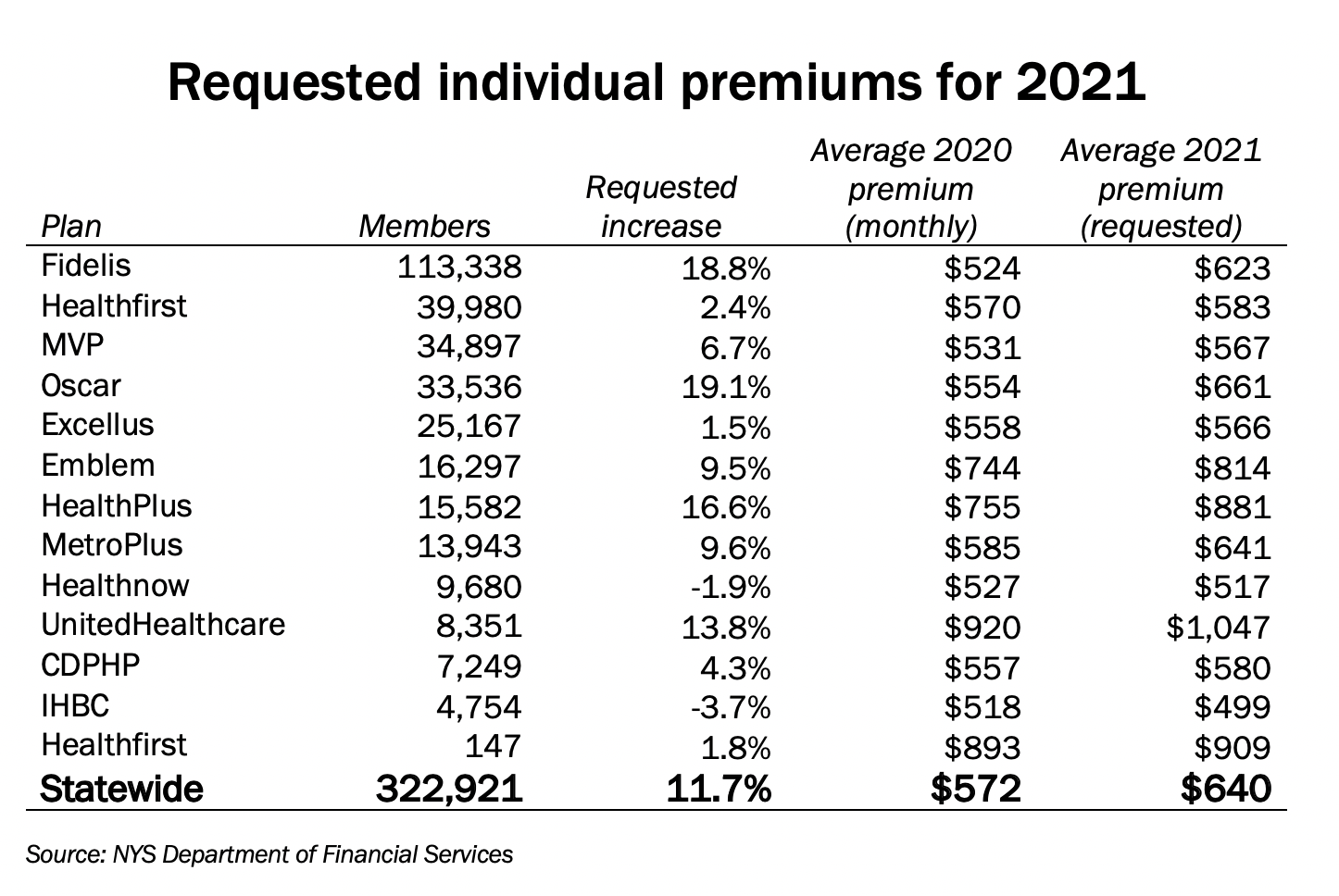 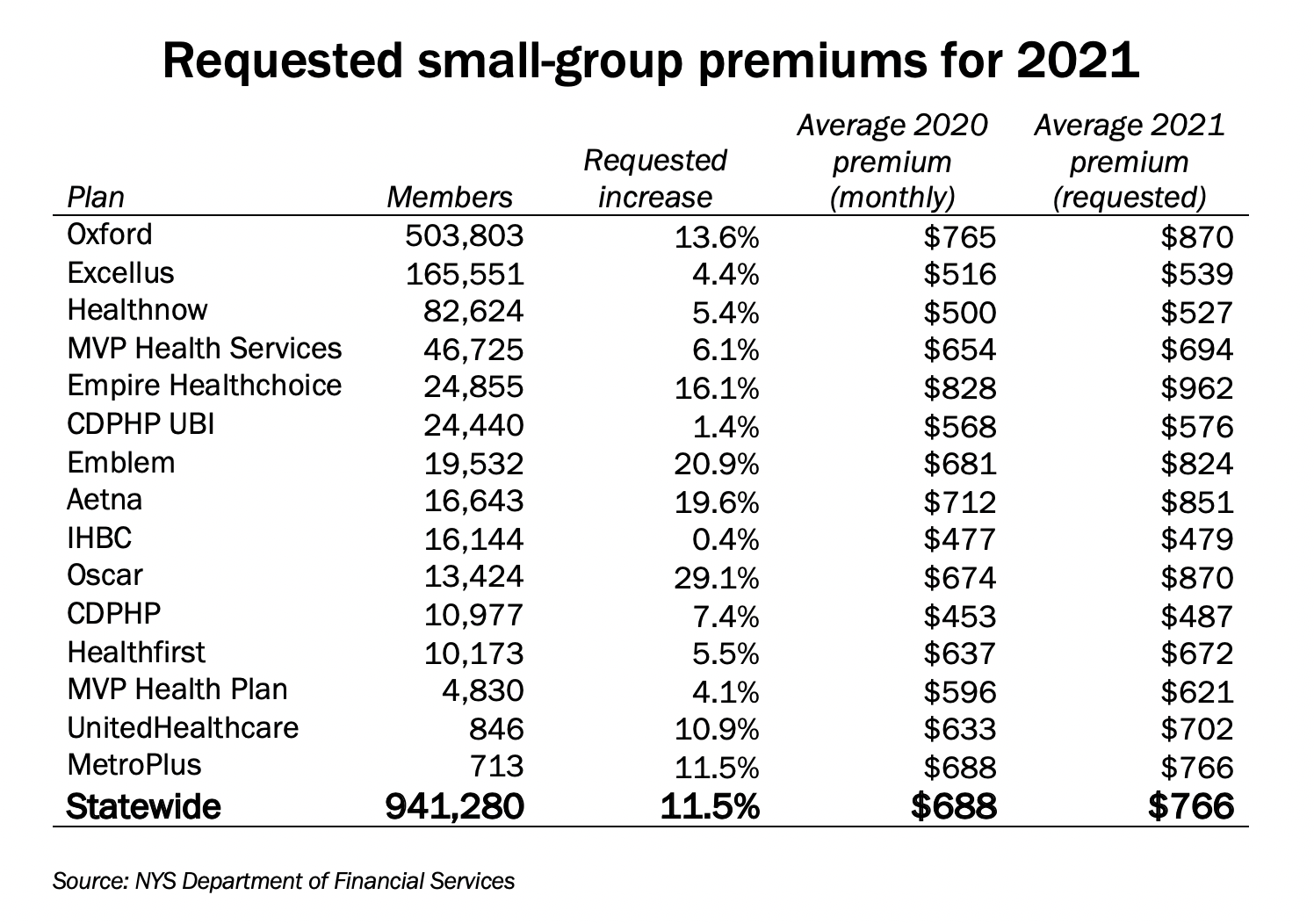