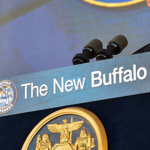 The SUNY Polytechnic non-profit subsidiary at the center of a federal probe into the Buffalo Billion initiative may have violated the state Labor Law in order to steer construction jobs to area unions.

SUNY Poly’s Fort Schuyler Management Corp., the funnel through which the state is building and partially equipping a new factory for Elon Musk’s SolarCity, required that the project contractor enter into a project labor agreement (PLA) with local unions. The deal essentially promises that workers on the project will be hired through union halls.

State law allows public entities such as Fort Schuyler to require PLAs, but it also lays out clear rules for doing so. Section 222(2)a of the state Labor Law requires an official determination—commonly known as a “due-diligence study”—demonstrating how a mandatory PLA would, at least in theory, save money.

The wording of the mandatory SolarCity PLA says it was signed “at the behest of” Fort Schuyler, which would be the entity responsible by law for conducting the required due-diligence study. But when the Empire Center, citing the state Freedom of Information Law, requested a copy of the study, Fort Schuyler official Carl Kempf responded in writing that “FSMC is not in possession of the requested record.”

If Fort Schuyler truly “is not in possession of” a document it was obliged to generate, it would indicate that the entity steered work on a $750 million construction project to politically influential trade unions without making any attempt to determine whether the public interest was being served in the process. And there’s reason to doubt it would be: a 2006 Beacon Hill study found that PLAs drove up school construction costs in New York by 20 percent, and a just-completed highway project in the Hudson Valley offers a case study in how the forced use of PLAs drive up costs on highway and bridge infrastructure.

As Jim Heaney at the Investigative Post explained, Fort Schuyler is the same organization that in 2014 falsely claimed that the Freedom of Information Law didn’t apply to it, either—even as it was acting as a conduit for public funds.

Fort Schuyler’s biggest installment of those state tax dollars has, incidentally, been delayed: a meeting set for tomorrow (May 18) at which the Public Authorities Control Board was supposed to sign off on a $486 million to the corporation has now been postponed, according to The Buffalo News.