New York City’s Independent Budget Office (IBO) has released its latest data on the distribution of city and state income taxes among city residents—and, once again, the numbers show the tax burden is very light on low- and middle-income households, and disproportionately heavy for top earners.

Summary details based on the IBO data are broken out in the following table, with tax shares representing total tax liability after credits. 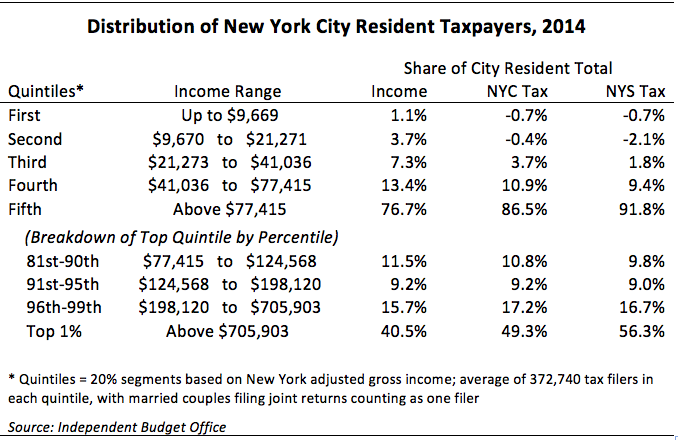 The distribution of the New York State income tax burden among New York City residents was even more steeply progressive, with the top 1 percent paying 56.3 percent and the highest-earning quintile paying 91.8 percent of the tax owed to Albany. This in large part reflects the impact of the so-called “millionaire tax,” a temporary 29 percent flat surcharge on filers with incomes starting at $1 million for individuals and $2 million for married couples. However, the state income tax distribution was somewhat more progressive than the city’s even before that higher rate first went into effect in 2009.

The lowest-earning 40 percent of tax filers are eligible for generous refundable city and state child tax credits and earned income credits. As a result, they get more back from the city and state than they pay in, so their tax shares are negative numbers.

The combined top income tax rate for city residents is 12.7 percent, second highest in the country after California’s 13.3 percent and more than double the roughly 6 percent median for the 42 states with state and local income taxes. States with no income taxes include Florida, which has been beckoning New York’s wealthiest residents for many years.

The problem with this steeply progressive distribution is not only the incentive it gives high-income households to consider investing, working and living elsewhere. It also makes the city and state budgets dangerously volatile and vulnerable to economic events, especially stock market downturns, whose effects are concentrated among high earners with volatile incomes from dividends and capital gains. The income of the top 1 percent plunged in the Great Recession, blowing a huge hole in the state budget that the millionaire tax only partly closed when it was first enacted in 2009.

While the incomes of very high earners have recovered, the added tax is still there through at least 2017. Even if it is finally allowed to sunset, New York’s city and state income tax base will be comparable to an inverted house of cards.